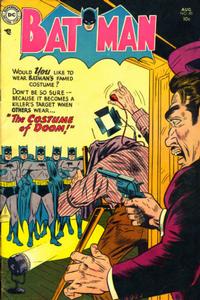 Robin—What is this? What are these handcuffs doing on me?

When the Joker is paroled from prison, Batman keeps an eye on him, suspecting that the Clown Prince intends to return to crime. Batman follows his foe into a laboratory. By accident both Batman and the Joker are exposed to epsilon rays which cause them to exchange personalities.

While Robin seeks a cure for Batman's predicament, the Joker contacts the underworld. Since he has Batman's body he offers to expose the secret identity of the Caped Crusader for a million dollars. Batman, stuck in the Joker's own body, works to stop his foe. He befuddles police by catching crooks, then prevents the Joker from giving away his secret. Fortunately, Robin comes through with a cure. Then the two foes are restored to their own bodies.

Appearing in "The Guardian of the Bat-Signal"Edit

Synopsis for "The Guardian of the Bat-Signal"Edit

When veteran cop, Harvey Hainer, proves to be unfit for duty, Batman has him appointed as guardian of the Bat-Signal. Batman and Robin soon find themselves in pursuit of a gang of parachuting thieves. When the Bat-Signal is not activated on time, they are too slow to catch the crooks. Hainer claims he never received notification to turn on the signal, but everything appears to work fine. Batman investigates and learns Hainer is blind.

Rather than have the cop fired, Batman helps him activate the signal without sight. When the crooks strike again, a technical malfunction prevents Hainer from activating the signal. This time, he comes up with an alternate way of alerting Batman. When Batman gets the timely alert, he and Robin are able to apprehend the gang.

Appearing in "The Costume of Doom!"Edit

Synopsis for "The Costume of Doom!"Edit

Vicki Vale arranges a reunion of Batman impersonators for a photo shoot. A gunmen fires at the men during the session injuring one of them. Further attacks are carried out against the impersonators including Bruce Wayne. Batman prevents harm from befalling any of the other intended victims, then returns to the scene of one of the attacks. Actor Hubert Hall, one of the impersonators, is in the process of aiding a criminal gang in stealing a load of gold bullion. Batman had deduced that Hall was working with the crooks. He tricks both Hall and his partners into confessions then explains to police that Hall used his position as an actor in a Batman movie to help the gang. He was in danger of being replaced due to his poor acting skill, so the gang attempted to injure potential replacements

Retrieved from "https://heykidscomics.fandom.com/wiki/Batman_Vol_1_85?oldid=1490308"
Community content is available under CC-BY-SA unless otherwise noted.