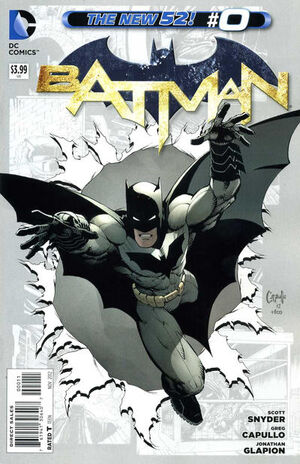 Five years ago, Lieutenant James Gordon prepared to make an important move for Gotham City; something he hopes would change the tides of justice. His daughter Barbara was unconvinced, warning that a move like this could undermine the justice system. It would show that the police had no control over anything. That, according to Jim, was exactly the case.

Meanwhile, at Graystone Academy, Timothy Drake had been called to the office of principal Renfield, who had just expelled him for hacking into Mr. Archer's computer. However, as he casually sent off an email from his smart phone, Tim predicted that he would not be expelled at all, for a few reasons. The first reason being that Renfield will soon discover that Tim actually aced the aptitude test that was meant to prove that he was cheating on his exams - obviously, he was not cheating - and Renfield could not expel the best student in the school.

The second reason was that he had actually broken into the entire teacher's network, not just Mr. Archer's. This led to the third reason: Tim had found evidence that Mr. Renfield had embezzled 41.6 million dollars of funding from the school over the last decade. The email Tim had sent was actually to the police, and they arrived soon after. However, this was not before Tim managed to ask his principal whether the test he was made to take was, in fact, an S.A.T. It was, and Tim realized he would have to start picking out colleges.

Elsewhere, a pair of thugs were robbing a convenience store. One of them was chosen to keep a look-out, but when he saw how scared the woman he was meant to hold hostage was, he tried to calm her by explaining his situation and telling her his name: Jason. Angrily, his partner warned that she would get them both caught if she knew their names. Coldly, he shot her in the face before Jason's eyes, and ran. Jason tore off his balaclava and chased his partner Chris down, reminding that he was promised no one would get hurt; that the guns weren't loaded. In rage, he leapt on Chris and promised to make sure he'd never hurt anyone again. He was in the process of beating Chris savagely when a policeman grabbed him by the shoulders and pulled him aside.

Just outside the city, Haly's Circus had set up shop, and acrobat Dick Grayson spotted a purse thief running through the crowd while he rehearsed. Deftly, he knocked the thief out, and returned the purse to its owner, inviting her to come to the Flying Graysons' performance later that weekend, which Bruce Wayne was rumoured to be attending.

It was a Bat-Signal - a sign to Gotham that their secret hope for Justice wasn't merely a fantasy.

His job done, Jim Gordon returned to his office to answer the calls and complaints that would surely follow his gesture. His daughter Barbara, however, was transfixed by the image floating ghostly above Gotham's skyline. Jim could only hope that the right people would see the light.

Retrieved from "https://heykidscomics.fandom.com/wiki/Batman_Vol_2_0?oldid=1660500"
Community content is available under CC-BY-SA unless otherwise noted.