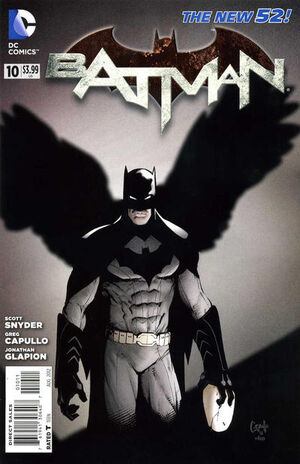 Appearing in "Assault on the Court"Edit

Synopsis for "Assault on the Court"Edit

Synopsis for "The Fall of the House of Wayne, Part II"Edit

As Jarvis Pennyworth struggles to evade the Talon sent to kill him, he recalls how he feels a responsibility for the danger unleashed upon both Thomas and Martha Wayne and their very legacy.

Martha had been working to build a school for Gotham City's underprivileged and forgotten children. She believed that through the school, she could shape the city into a better place for her son Bruce, and for the second child that she still carried in her womb. She was nearly due, but she continued to work tirelessly to build the school while Jarvis looked after Bruce. Bruce was quite gifted, and Jarvis hoped that one day his son Alfred would grow to love the boy as he had.

One day, Martha had called Jarvis into her office to tell him to put Bruce to bed, but he had overheard her on the phone with the mayor, annoyed that someone claiming to be representing the city had threatened her away from building her school. The mayor disavowed any knowledge of the threats or those who made them. Angrily, Martha had hung up, not imagining that the threats could have come from somewhere other than City Hall.

Jarvis hides in a shed, but the Talon follows him, and rather than seek him out, he spreads gasoline all over the building. Jarvis recalls that he had once been warned never to push a Wayne towards greatness. Happiness was a much better goal. He had failed to take that warning seriously.

One day, he had received a mysterious phone call instructing him to bring Martha Wayne to a secluded corner of the docks, under false pretenses. Naturally, he refused, but the voice warned that if he failed to comply, things would be unpleasant for both his masters and him - past, present, and future. Suddenly, Jarvis was startled by the sight of an owl flying determinedly into the window next to him. Its broken neck was as much a warning as the voice on the phone.

Jarvis told Martha about the call, but she was determined to see her good work done. She had planned to take Bruce to see the school's grounds, and Jarvis failed to prevent them from doing so. He should have known better. He had known when he saw the owl who was targeting the Wayne family. He had understood that the Court of Owls was real. As he drove Bruce and Martha to the new school, the car was suddenly caught in an explosion, and flipped right at the intersection of Lincoln and March.

Now, Jarvis' fate is sealed as he burns to death in the shed.

Retrieved from "https://heykidscomics.fandom.com/wiki/Batman_Vol_2_10?oldid=1660497"
Community content is available under CC-BY-SA unless otherwise noted.