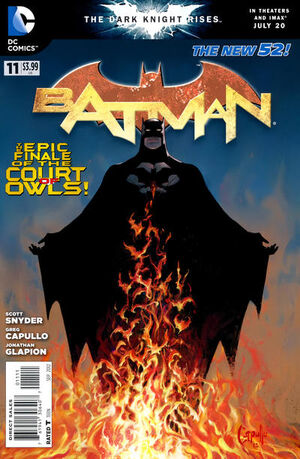 Appearing in "My Brother's Keeper"Edit

Synopsis for "My Brother's Keeper"Edit

Synopsis for "The Fall of the House of Wayne: Conclusion"Edit

With his carriage house in flames at the hands of a Talon of the Court of Owls, Jarvis Pennyworth safeguarded the letter he had written for his son Alfred and smashed through an upper window to escape.

He remembered the accident that had occurred at the intersection of Lincoln and March; the accident that had caused the premature birth of Thomas Wayne, Jr. He remembered the screams and the blood the most. Martha had taken the brunt of the impact, shielding her son Bruce from danger. As a result, her unborn child, born early, was lost. From that point, she was consumed by sadness. Jarvis had even caught her speaking to her husband as if the child had survived, but she had covered it up when she realized he had heard.

To bring some closure to the issue, the family had planted a willow tree at the edge of the Wayne Family cemetery. It didn't work, and Thomas and Martha decided to leave the country for the summer, to heal away from the city. Even at that time, it seemed to Jarvis as though young Bruce had forgotten the trauma already. Jarvis himself hoped that he could forget as well, and experience life as joyfully as he once had. But the threats that the Waynes had received on the day of the crash still niggled at the back of his mind.

On the day of the letter's writing, Jarvis received another call. The voice on the other end warned him that his attempts to spare the Waynes resulted in the closure of the school Martha had been planning, not to mention caused the death of her child. Now, they had targeted him and his family. Angrily, Jarvis warned the voice away from harming his son, leaving the phone off its hook as he rushed off to write his letter.

After jumping out of the carriage house window, the Talon caught up with Jarvis. He had warned his son in his letter not to come to Gotham; to think on it with fear. The grounds of Wayne Manor were cursed in his mind, and they should be so for his son. Unfortunately, as the Talon ended Jarvis Pennyworth's life, his letter burned in the flames spreading across the grounds.

In the present day, Alfred lays a bouquet of flowers on his father's grave, remarking to his ward Bruce that his father would have discouraged the love of botany that brought about the flowers' growth. None of his father's preparations could have succeeded in preparing Alfred for the life that he would lead serving Bruce Wayne.

Bruce understands that Alfred's bout of nostalgia is the result of his having found the Pennyworth name in the Court of Owls' labyrinth. He promises that they can learn the truth about Jarvis' death together, but Alfred isn't interested. As big as the mystery surrounding Jarvis' connection to the Court may be, it is enough to know that the Batman has made efforts to bring the Court to justice.

Alfred recalls how he had come to Wayne Manor and found it under a cloud of darkness. The accident loomed heavily over the Wayne family during that first year, but Alfred's own tenuous connections with his father were enough to make him uncomfortable. He had felt as though his father's ghost was haunting him; warning him of something he never could express. Alfred has spent his life trying to gain a sense of who his father was, and he has no desire to actually dig up the man, and find out.

As far as Alfred is concerned - whether Jarvis Pennyworth was murdered by the Court, or whether Lincoln March is Bruce's brother - for the time being, they ought to let their long-lost kin rest undisturbed.

Retrieved from "https://heykidscomics.fandom.com/wiki/Batman_Vol_2_11?oldid=1660498"
Community content is available under CC-BY-SA unless otherwise noted.