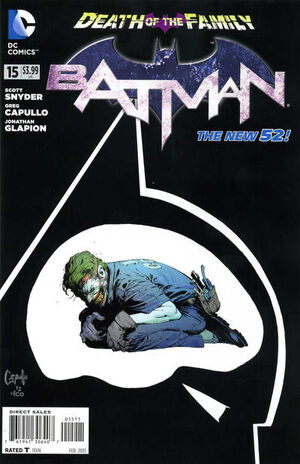 Appearing in "But Here's the Kicker"Edit

Synopsis for "But Here's the Kicker"Edit

The Riddler is growing tired of his guard's failure to answer any of his riddles, having spent much of his free time stuck in Arkham Asylum coming up with them. It is clear, however, that Chuck - the guard - is preoccupied by something. Apparently, someone threatened the lives of his family.

At that moment, a group of other guards hobbles past, trying to carry a live horse on their backs down the hallway. Even with Chuck's help, they drop the horse, and it pins another guard to the ground under its weight, breaking his legs.

Annoyed, the Joker appears. Claiming that the horse has been ruined by their clumsiness, he shoots it in the head. After ordering the guards to go back outside and get another horse, he shoots the pinned guard dead as well.

Looking up, Joker spots the Riddler in his cell, and challenges him to come out and join him. Warily, he suggests that Joker grab a keycard from the dead guard and open the door from him, but Joker considers that method unsporting. He knows that Riddler has one of the finest minds for riddles, and as such, must have come up with a dozen ways to get out of his cell on the first day of his incarceration. Surly, Riddler refuses, so Joker gives him the deadly incentive of releasing a gas capsule into his cell.

As the cell fills with gas, Joker explains how the Riddler's efforts always challenged Batman to be at his best. In that way, his role was like that of Batman's master-at-arms, sharpening the sword of his wit. It is time, he says, to re-enter his bat-king's service.

With so little time left before the toxin begins to work, the doors to Riddler's cell spring open, and he coldly announces that there were actually forty-six ways out - though only four that would have got him out in time. In this case, he rewired the door through a hole he carved weeks ago.

Gleefully, Joker welcomes Riddler into his operation, showing him the plans he drew up on the back of Jeremiah Arkham's doctoral diploma. Though Riddler thought he could guess what Joker had in mind, what he sees in those plans is beyond even his comprehension. Joker assures him that he doesn't need to understand it, but that it will be worth being along for the ride.

Retrieved from "https://heykidscomics.fandom.com/wiki/Batman_Vol_2_15?oldid=1660503"
Community content is available under CC-BY-SA unless otherwise noted.