Start a Wiki
Part of the 'Death of the Family' event 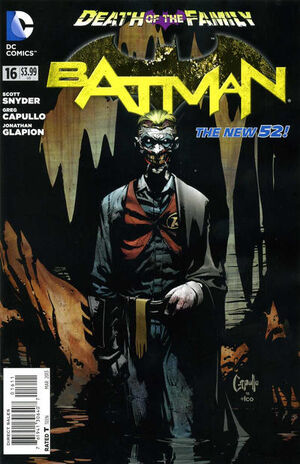 Appearing in "Castle of Cards"Edit

Synopsis for "Castle of Cards"Edit

With Batman having just been filled with a likely fatal jolt of electricity, the Joker's collaborators are unsure if he is really dead. Still, they are eager to get out of the asylum before the police arrive, so Two-Face decides to flip on whether he puts a bullet in the Batman's gut or his head.

The Joker warns him that such a plan is contrary to his game, and begins carting the body away for the next stage of his plan. Still, though, Two-Face claims that they have a right to be witness and participants to the Batman's final end. Rejecting that claim, Joker drops the bars down into the middle of the room again, blocking the three villains from interfering.

Before Riddler can deduce a way out of their cage, he suddenly collapses thanks to tranquilizers the Joker implanted in his costume. With that done, the Joker returns to dragging Batman to their dinner with the rest of the bat-kids. However, Two-Face points his pistol at the Joker, warning him not to leave. Mockingly, Joker states that Harvey and the others have no right to Batman's death, having chosen Harvey as judge because he was nothing. He abandoned his values after getting a vial of acid in the face, as if that were enough, and then took on the guise of a gangster. He dares Two-Face to pull the trigger, given that he may have tampered with the gun already. There is still a chance he might kill the madman - which might as well mean that he has switched sides. Crestfallen, Harvey lowers his weapon.

After hearing the Penguin's plea to hear reason, Joker agrees to give them a taste of what he has in store, and nothing more. He presents an entree platter, and removes the lid for them. What they see there confuses and disturbs them. The Joker explains that when it comes to jokes, he has to play with the audience's expectations, and then returns to his dinner preparations.

Retrieved from "https://heykidscomics.fandom.com/wiki/Batman_Vol_2_16?oldid=1660504"
Community content is available under CC-BY-SA unless otherwise noted.