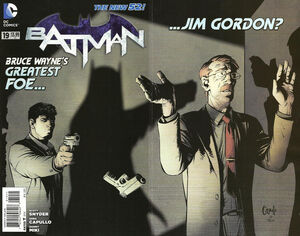 Six people have gone missing over the last 24 hours in a building in Gotham City's Narrows district - including one of the investigating officers. As Harvey Bullock arrives with backup, Batman watches from afar, and is interrupted by Superman, who is concerned that his sometimes-partner has been ignoring his calls. Despite his refusal to discuss the death of his son with the man of steel, Batman briefs him and invites him to join in on the investigation.

Inside, they discover what Superman calls a Ghost Light. As children in Kansas, he and his friends had been warned not to follow them into the fields, or they would never be seen again. In other cultures, they have been known as Will O' the Wisps. Batman explains that the investigating officers had followed the Ghost Light to whatever it was that took one of them away. As they follow it, Superman begins to feel nauseous - a rare experience for him. The light eventually stops in a room where an occult room has been drawn on the floor next to a pile of corpses. Superman's nausea becomes more intense, and he warns that they should get out of there.

They are interrupted by a voice which warns them that they should not have followed the light. Superman's vision begins to hurt while trying to look at the girl from whom the voice comes. He explains that she is not a hologram or projection - in fact, he can't be sure what she is. Fascinatingly, the girl's existence seems to be entirely supernatural.

The girl explains that she didn't kill these people - it was her friend who started it all. He, too, is dead, and lying next to her own lifeless body. It was her friend, she explains, who brought the monster - the Will O' the Wisp. Looking up, Batman and Superman are disturbed to see a horrifying creature waiting to consume them.

Retrieved from "https://heykidscomics.fandom.com/wiki/Batman_Vol_2_19?oldid=1660507"
Community content is available under CC-BY-SA unless otherwise noted.