Start a Wiki
Part of the 'Night of the Owls' event 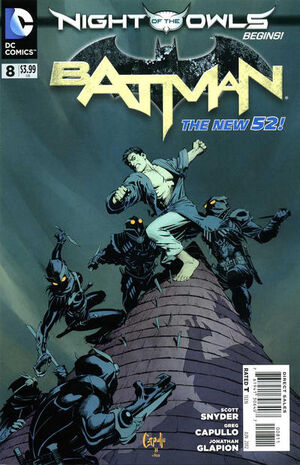 Appearing in "Attack on Wayne Manor"Edit

Synopsis for "Attack on Wayne Manor"Edit

In his reinforced battle armoured Batsuit, Batman faces the assembled Talons - the assassins of the Court of Owls. Meanwhile, Alfred Pennyworth attempts to decrypt the stolen Talon computer chip from within the Armoury.

Alfred is horrified to discover that the chip contains a list of targets including nearly every public figure in Gotham City. Alfred realizes that the lives of Commissioner Gordon and Mayor Hady are in great danger.

Across the city, public figures such as the city comptroller, the deputy sheriff, the county supreme court justice - they are all surprised and murdered by Talons; sentenced to die by the Court of Owls.

In the cave, Batman order Alfred to put out a call to the entire Bat-Family. All of those who are in the area and can help, must go to those on the list and protect them. This will be a difficult task, as the Talons have extraordinary regenerative abilities, and for many of the targets on the list, it may already be too late.

Alfred is startled by banging on the Armoury doors, as the Talons call out that he is targeted for death as well. Sighing, Alfred wishes his charges luck, and prays for their safety.

Retrieved from "https://heykidscomics.fandom.com/wiki/Batman_Vol_2_8?oldid=1660495"
Community content is available under CC-BY-SA unless otherwise noted.