Part of the 'Night of the Owls' event 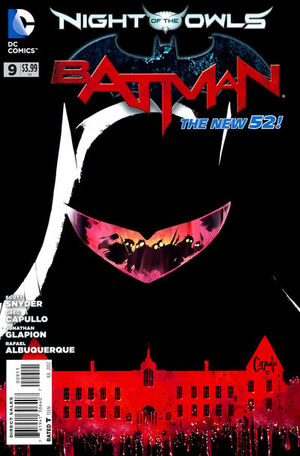 Appearing in "Night of the Owls"Edit

Synopsis for "Night of the Owls"Edit

Synopsis for "The Fall of the House of Wayne, Part I"Edit

Behind the glory of the Wayne family, Jarvis began to uncover darker shadows, and terrible danger. He had served Thomas and Martha, and their young son Bruce thinking that he was preparing a better life for his own son. But that future became dark and nebulous when Thomas and Martha decided that they should become more involved in Gotham City; make it a better place. That decision would see them all marked for death. Still, Jarvis acknowledges that whatever happened or happens to he and the Wayne family as a result - it is his doing.

Not long after writing the letter, Jarvis rushes out to his car in hopes of leaving the manor. From inside, the shadowy figure of an assassin sees him. Jarvis is stopped at the gate to the estate, as the door will not open without throwing a switch. Rain pelting him, he tugs the lever downward, but the gate remains closed. He decides he might try ramming it, in his desperation to escape. The car comes to a crashing halt as it collides with the doors. He looks back to see that the lever has been raised without his noticing. Looking up through his cracked windshield, Jarvis Pennyworth sees a Talon of the Court of Owls, and the agent of his doom.

Retrieved from "https://heykidscomics.fandom.com/wiki/Batman_Vol_2_9?oldid=1660496"
Community content is available under CC-BY-SA unless otherwise noted.