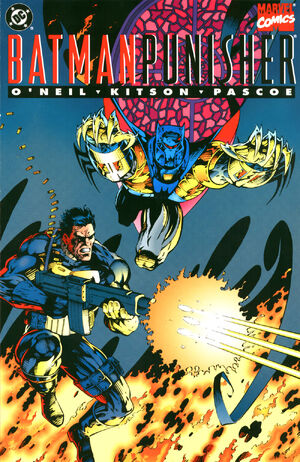 Appearing in "Lake of Fire"Edit

Synopsis for "Lake of Fire"Edit

Punisher teams up with the replacement Batman (Azrael) whose brutal tactics compliment one another. This was the first DC/Marvel crossover after a long period of time after the X-Men/Teen Titans one.

Though crossovers tend to be non-canonical, Batman #509 has Jean-Paul mention Jigsaw by name. This is probably due to the fact that Jean-Paul was growing more and more insane and actually believes he fought the criminal, thus they were allowed to get away with it.

Retrieved from "https://heykidscomics.fandom.com/wiki/Batman_and_Punisher:_Lake_of_Fire_Vol_1_1?oldid=1713569"
Community content is available under CC-BY-SA unless otherwise noted.