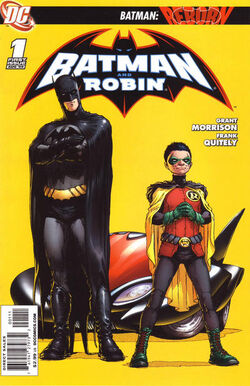 Batman Reborn is a Batman and Robin storyline written by Grant Morrison and illustrated by Frank Quitely, part of the Morrison's Batman saga. It's the debut arc of Morrison's Batman and Robin series, followed by Revenge of the Red Hood. This story is a part of the larger crossover Batman: Reborn which establishes the Batman Family status quo following Battle for the Cowl and Bruce Wayne's disappearance during Final Crisis. The other stories published simultaneously include Batgirl Rising, The Deep, Elegy, The Grail, Hush Money, Long Shadows and Union.

Batman and Robin chase down an amphibious cockney drug dealer named Mister Toad, who's revealed upon arrest to be carrying a briefcase full of dominoes. Their new vehicle is a flying Batmobile made using Damian's tinkering to his father's designs. Back in Wayne Manor, Dick speaks to Alfred about his fears replacing Bruce and the difficulties of mentoring Damian. Commissioner Gordon continues to shine the W:C:DC:Bat-SignalBat-Signal after months without a response, and Batman and Robin finally arrive to answer him. Mister Toad screams in custody that his friends will be coming to get him out, and GCPD Headquarters is attacked by a trio of freaks called the Circus of Strange. Elsewhere one of Toad's human accomplices tries to flee town, but he's cornered by a man calling himself Professor Pyg who turns him into a horrifying Dollotron and makes his daughter Sasha watch.[1]

The Circus of Strange

They fight Big Top, Kushti and Phosphorus Rex although this battle turns into a casualty-laden disaster when Robin disobeys orders. They determine that Toad and his crew were trading in next-level mind control drugs through Russian people traffickers. Mister Toad is found dead in his cell holding one of the dominoes. Back in the Bat-Bunker, Damian angrily refuses to acknowledge Dick's authority and leaves to handle things on his own. Alfred reassures Dick in the difficult part of playing Batman, reminding him that Damian was raised by deadly assassins and his path to redemption will be long and hard. Damian tracks their leads down to the abandoned Bonus Brothers Carnival, where Pyg captures him to turn him into another Dollotron.[2]

Mommy Made of Nails

Gordon allows Batman to interrogate Phosphorus Rex, and Batman drags Rex screaming through the streets using the Batmobile. It's explained that Pyg uses an airborne narcotic that spreads addiction like a virus and plans to spread it across Gotham. Damian is forced to listen to Pyg's delusional rantings while he's tied to a chair, although he is able to break free. The young girl Sasha has somehow retained her mind since becoming a Dollotron, and helps Robin fight through the other ones. When Batman arrives they punch out Pyg together, although the carnival is still on fire. They stop the virus before it can spread further, and Batman finds another domino next in the sequence from Toad's next to the antidote. Gordon arrives to thank Batman and give him his support, although he insists on not having their disappearance explained to him. Later on, Batman and Robin finally hunt down Le Bossu torturing a police officer then kick his ass. Sasha is revealed to have been hospitalized with the other Dollotrons, and after she mercy-kills her father the Red Hood asks her to be his new sidekick.[3]

Retrieved from "https://heykidscomics.fandom.com/wiki/Batman_and_Robin:_Batman_Reborn?oldid=1516785"
Community content is available under CC-BY-SA unless otherwise noted.