Revenge of the Red Hood is a Batman and Robin storyline written by Grant Morrison and illustrated by Philip Tan, published as part of the larger Morrison's Batman saga. It's the second arc on his Batman and Robin series, fo

Revenge of the Red Hood 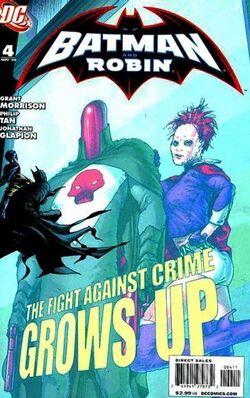 Batman and Robin track down a super-villain named Lightning Bug, but he's intercepted by Red Hood and Hood's new sidekick Scarlet who murder him ironically. They take pictures using a camera-phone and upload them to twitter, then leave their calling card behind. Later while talking to Lucius Fox at a Wayne Foundation fundraiser, Dick and Damian are introduced to visiting British crime-fighter Oberon Sexton by James Gordon. Back in their secret headquarters, Scarlet worries about her Dollotron face and Red Hood insists that it is what makes her special. Batman and Robin watch a secret meeting held between Penguin and the Penitente Cartel, until Red Hood interrupts by murdering Aitch-Eyes, Fidget, Gentleman-G Merriwether, High-Rise Romero, Gabriel Santo and Tony Li. Grayson bursts in to stop him from killing Penguin and realizes Jason Todd has returned.[1]

Red Hood and Scarlet explain that their next-level approach to crime-fighting is the only solution, then esccape while Batman takes the still-breathing Santo to a hospital. The massacre is covered by news media, who take a poll showing that more than half of Gothamites agree with Red Hood's no-nonsense solutions. Santo is interrogated by Gordon in a hospital, where another domino is found on his person and he threatens that a greater killer is coming to Gotham. It's explained that Red Hood has been studying marketing to gain public approval, and Scarlet wonders what kind of arch-enemies they'll develop the same way Batman and Robin have. Later they're interrupted again while trying to finish off Santo in his hospital bed, although they knock out Batman and Robin. El Flamingo arrives in Gotham on a plane full of supermodels with their faces eaten off, then shows up and immediately shoots Red Hood with a high-powered rifle.[2]

Batman and Robin wake up in Red Hood's secret headquarters, where he's planned a webcam show to reveal their secret identities if the hotline receives a million calls. They slip out of their ropes before the camera can activate, and tell the viewers to get a life. Outside Red Hood and Scarlet are in a brutal fight against El Flamingo, who nearly executes both of them bleeding on the ground. They're interrupted by Robin carrying a stolen rocket launcher, and Batman attacks Flamingo although he's unable to save Damian from getting shot in the spine. Red Hood recovers and uses construction equipment to bury Flamingo under a pile of rubble, although the GCPD arrive and arrest him for murder. Damian explains that he's been paralyzed from the waist down, and the League of Assassins arrive to take him home. Jason is unmasked and carried away screaming that he is the solution Gotham needs, while Scarlet escapes in a car and her Dollotron mask finally falls off. Oberon Sexton receives a call from El Penitente telling him to do something, and Penitente appears to have really been Doctor Hurt. In the Bat-Bunker, Grayson enters a special chamber with the pass-phrase Zur En Arrh and looks at Bruce Wayne's preserved corpse.[3]

Retrieved from "https://heykidscomics.fandom.com/wiki/Batman_and_Robin:_Revenge_of_the_Red_Hood?oldid=1516781"
Community content is available under CC-BY-SA unless otherwise noted.