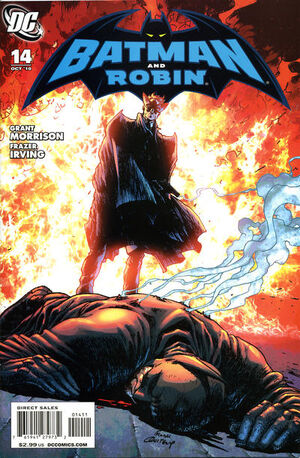 Appearing in "Batman and Robin Must Die, Part Two: The Triumph of Death"Edit

In "Batman Must Die!" part 2 of 3, one of our heroes lies near death! Dick Grayson and Damian Wayne enter the ultimate, blood-soaked battle against two foes who almost destroyed the original Batman. Are the new Dynamic Duo up to this final confrontation with absolute evil? If they can't truly bond as a team, they're dead!

Retrieved from "https://heykidscomics.fandom.com/wiki/Batman_and_Robin_Vol_1_14?oldid=1671970"
Community content is available under CC-BY-SA unless otherwise noted.