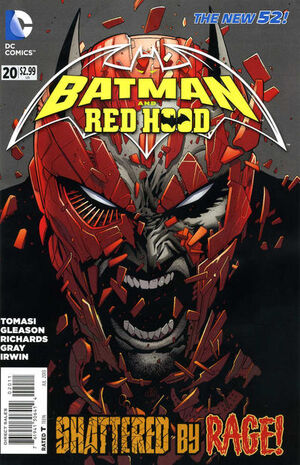 If you cared about me and what I've lost, you'd want to dredge this up! Don't you see-- there's a chance you can help me erase one of the worst days of my life, Jason! You can give me the greatest gift of all and help me figure out how to bring my son back!

While Batman tracks the activities of a gang of snipers in Ethiopia, he is interrupted by a call from Alfred Pennyworth, indicating that the girl Carrie Kelley has shown up to the manor unannounced. Coldly, Bruce meets her upstairs and asks what he can do for her. She responds with indignation, confused at the fact that Damian Wayne seems to have disappeared completely, followed by Bruce's giving her an envelope full of cash that she didn't earn.

As she intrusively takes in the decor of the manor's interior, Bruce asks why she was giving his son acting lessons. She responds that he had claimed that he wanted to know what it is like to become someone else. Corralling her, Bruce states that her services will no longer be needed, due to circumstances, lying that Damian has begun studies abroad for the next several years, and promising that Damian will call her in a few days. Derisively, she tosses him back the envelope of money, and condemns his decision to have his son sent away. She refuses to keep the money on the grounds that she didn't earn it.

Before Bruce can have her kicked out, she spots Titus and responds by quoting a line from Titus Andronicus. She establishes a quick and easy rapport with him, explaining that her mother used to run a kennel, and as such, she has some special knowledge about his breed; the great Dane. She notes that Titus needs more exercise, and Bruce responds that Alfred will handle that - in addition to showing her the door. As Bruce leaves, Alfred admits his pleasure at her awareness of Shakespeare, and offers her a regular job of walking the dog for them. He promises that Bruce's callous behaviour will subside eventually.

Later, Bruce calls Jason Todd to him, and explains that he has a mission for them. They will find these assassins in Ethiopia, and swiftly bring them down so that they can't engage in behaviour like hunting down ten-year-olds - like they had when Talia al Ghul put out the bounty on Damian's head. Jason agrees to help, and the pair of them unleash a brutal attack, with Bruce going so far as to allow Jason to make non-lethal shots with his pistols. Even so, Batman doesn't appear to need Jason's help at all, and he uses electrically charged gauntlets to essentially kill the nerves in the snipers' hands, making it impossible to pull a trigger.

Once the snipers are dealt with, Bruce drives Jason an hour out of their way to the Magdala Valley - the very place that Jason himself was beaten to death by the Joker before the building he was left to die in exploded. Jason is understandably hurt that he was brought here, displeased that Bruce brought him to Ethiopia with an ulterior motive. Bruce admits that he'd hoped being brought back to this place would jog some kind of memory of how Jason came back to life, so that he could apply it to getting Damian back. Jason responds that he would prefer to have kept those memories buried. He is not so eager to look back. Bruce reacts emotionally, angrily condemning Jason for failing to see how important getting Damian back is. They come to blows, but it is Jason who comes up on top, though Bruce still stands. Angrily, Jason states that he will be taking the car, and leaves Bruce to wait for the Batplane.