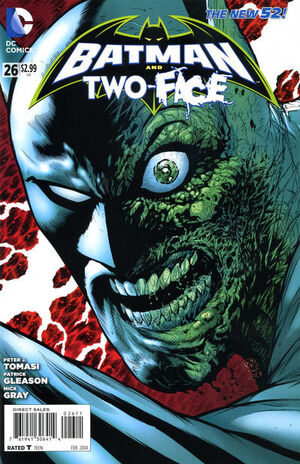 Each day without her is like the ache of a phantom limb -- She's here and she's not, if that makes any sense... and it's all thanks to Harvey Dent.

Appearing in "The Big Burn: Ignition"Edit

Synopsis for "The Big Burn: Ignition"Edit

Erin McKillen is surprised to have wound up at Bruce Wayne's dinner table, having only recently been broken out of Blackgate Penitentiary with the help of Matches Malone - who was actually the young billionaire in disguise. He claims that Malone put her up for ransom to the highest bidder, and that happened to be him, following her demands for help from him earlier. In truth, she had asked for a bodyguard, worrying that the Gotham crime families would have placed a price on her head to keep her from cooperating with the police. Naturally, whatever brought her back to the city after so long might be worth cutting a deal over, but the McKillens - Erin especially - are too proud to ever work with law enforcement.

Regardless, Bruce is only helping because he remembers who she was at Roxbury academy - while he abhors who she has since become. Even so, he felt obligated to protect her, because clearly the staff at Blackgate was incompetent in that respect, given the attack she was rescued from. Grumpily, Erin comments that if he doesn't intend to turn her over to the police just yet, he could at least untie her from her chair.

Obliging, Bruce unlocks her handcuffs and is rewarded with a punch in the jaw. Despite that, he admits that he will do nothing to stop her if she tries to leave - however, she will probably not survive the night. Erin demands a phone call, and uses it to call her cousin Kieron, demanding that he come to Wayne Manor and bring her a change of clothes before preparing her private plane for a speedy exit from Gotham. Bruce warns that as much as she might try to escape, she will not escape herself. He knows just as much about suffering as she does, reminding her of the murder of his parents.

Recalling back to their childhood, Erin wonders which of the McKillen sisters - she or Shannon - that Bruce liked more. Though he is initially evasive, he admits at last that he had a much more intimate relationship, emotionally, with Shannon, who got him to talk about his parents after they died. Shannon had a way of putting people at ease, and since she died, Erin has felt like a part of her was missing - and she blames Harvey Dent.

In the past, both McKillen sisters had been in prison, serving life sentences when Harvey Dent visited them. Their lawyer was not interested in seeing them, given that they were seen as a lost cause. This was especially true since he had lost two appeals in as many years against Harvey and the DA's office. Shannon, while angry with Dent's taunting them, had calmly decided to end the visitation, but Erin couldn't keep her emotions in check, slamming a chair against the glass separator. Shannon reminded that they knew he had found a way to subvert client/attorney privilege, though they couldn't prove it. Cruelly, he responded that they had plenty of time to find that proof, given their sentences. At the least, the McKillen twins would grow old together.

After a third failed appeal, the sisters gave up on the legal system, and decided that they would make an escape attempt on their late father's birthday. As long as one of the sisters was free, both of them would be free. Together, they drew straws, reluctantly, and it was Shannon who drew the shorter. Through tears, Erin listened from her separate cell as her sister hanged herself to death. Making good on Shannon's sacrifice, Erin called for help. A guard who had known of the plan was then to hold up her end of the bargain, and in exchange her son's life-saving operation would be paid for by the McKillens.

Later, Erin was taken to confirm the identity of her sister's corpse, and the guard was ordered to place Erin in a wheelchair under sedation. While the morgue attendant's back was turned, the guard put Shannon's body in the chair, and placed Erin on the slab. Shannon's corpse was returned to Erin's cell, and Erin was free.

Soon, Kieron arrives at Wayne Manor, and Erin prepares to leave. Before she does, Bruce offers her a moral lesson of Cherokee origin. A girl dreams of two wolves from the same pack fighting viciously and seeks explanation from her wise grandfather. He explains that there are two forces inside each of us struggling for dominance; the light and the dark. The girl is upset by this, and wants to know which side wins. Her grandfather responds, "The one you feed." There is still hope for Erin, in Bruce's eyes.

Sighing, Bruce muses on how all of this started because he convinced Harvey Dent to run for the D.A.'s office, though only after Erin had tried to kill the commissioner. Bruce has placed tracers on both Erin and Two-Face, now, and he hopes to catch them both in the same net.

On their way away, Kieron reminds how important it is to deal with Two-Face, given how much he wants her dead - not to mention how grateful the other Gotham families would be if she killed him. Erin, though, would rather just leave the city, and have Dent killed from her home in Belfast. She can easily hire an assassin to do it for her. Before heading to the plane, though, Erin insists that she visit her sister's grave. Kieron, has other plans, though, having drugged her. Erin loses consciousness within moments.

Erin wakes at the foot of Gilda Dent's grave, with Two-Face standing over her. Kieron had betrayed her. Despite never getting his hands dirty by killing, he had ingratiated himself with the other Gotham families by being a businessman rather than a bipolar loose cannon like her. Erin responds that Kieron's plan to kill Two-Face and garner further favour with the families is going to backfire. Unaware, to this point, that the other families are eager to be rid of the unstable criminals like him muddying the waters, Two-Face turns on Kieron and shoots him dead.

As Kieron's men open fire, Batman arrives on the scene, having followed Erin's car. In the confusion, a woozy Erin tries to make an escape, but Two-Face gives chase, still seeking revenge. When Batman finishes with the McKillen thugs, and catches up, he fails to prevent Two-Face from trapping him in an open grave under the weight of a fallen statue.

Retrieved from "https://heykidscomics.fandom.com/wiki/Batman_and_Robin_Vol_2_26?oldid=1412649"
Community content is available under CC-BY-SA unless otherwise noted.