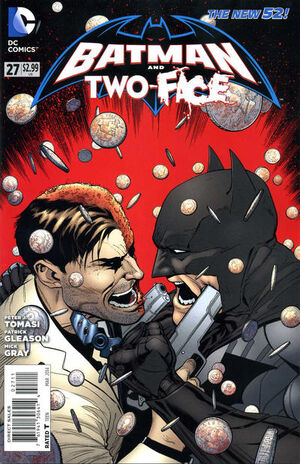 Heads you burn, tails you die.

Appearing in "The Big Burn: Ablaze"Edit

Synopsis for "The Big Burn: Ablaze"Edit

Pinned under a statue in an open grave, Batman can only lie there and listen as Harvey Dent forces his prisoner Erin McKillen to hug the gravestone of his late wife Gilda, whom she murdered as vengeance for what she saw as Harvey's complicity in the suicide of her sister Shannon, who sacrificed her own life so that Erin could escape prison. He demands that she apologize for her actions, and her response leaves him wanting. So, he prepares to flip his coin to decide her fate.

From his prison, Batman begs Harvey not to do it, but he is too late. The coin lands with heads face-up, winning Erin the chance to burn like she made him burn, uncorking a bottle of the same acid that she used to disfigure him. Unexpectedly, a bullet pierces through Harvey's shoulder, and smashes the bottle. Though a splash of the acid gets in Erin's eye, she is spared the worst of it, thanks to her cousin Kieron's calling in favours from the other Gotham City families.

Unfortunately, they are only there to kill Two-Face, not save her. In fact, seeing Batman buried under the statue, they toss her down into the open grave with him, intending to bury them both before they deal with Two-Face. Batman shields them both beneath the statue as the thugs unload their firearms into the grave. In the brief moment that they have to reload, Batman frees them from the shattered statue's remains, and grapples away with both Erin and Two-Face in his grip.

Though Erin and Harvey are at each other's throats, Batman hurries them into a crypt, warning that they don't have time to fight each other. He explains that this crypt was built during the prohibition era as a secret tunnel for the smuggling of alcohol. He challenges Two-Face to flip his coin and decide whether to keep a momentary truce between the three of them until they are in the clear, or kill both he and Erin right away. With the mobsters still firing a barrage of bullets at them, Two-Face flips for it, and soon they are running together through the tunnels.

Soon, though, the mobsters catch up and fire an RPG into the tunnel. The explosion causes the tunnel to cave in, and though they are all alive, Two-Face winds up stuck on the wrong side of it. He is soon captured, leaving Batman and Erin alone. Though she doesn't care if they kill him, Batman will not allow it, and demands to know where they are taking Harvey.

Some time ago, Harvey Dent was faced with numerous cases as a defense attorney where he would see cases thrown out because of Batman's vigilante justice. While celebrating another victory of that kind, a dinner with his wife was interrupted by a private phone call from the McKillen twins, who demanded that he leave dinner to speak with them. As it turned out, they had planned a hit on Jim Gordon, and it had gone poorly. They hadn't expected his marine training to be as sharp as it was. He eliminated the threat and killed many of their goons. Angrily, Harvey warned that it was foolish to put out a hit on the commissioner after he had only just cleared them of all the charges in their last case. He insisted that he won't be a party to killing innocent people, and refuses to act as their attorney any longer. Grimly, the twins warned that as their family attorney, he would be on retainer for life.

Later, Harvey confessed his situation to Gilda, and she explained that so long as he had a choice, he'd never be powerless. She concedes that she would accept it if he had to do a little bad to do more good. An unexpected visit from Bruce Wayne ended their conversation, though. Bruce suggested that Harvey's tendency to get criminals off on technicalities was contributing to the fall of Gotham, and offered that he and some others wanted to financially back Harvey's bid for the District Attorney's office. They had chosen Harvey because the best person to help put criminals away would be someone who understood all of the labyrinthine legal technicalities that other lawyers might try to exploit. Harvey pointed out that the plan seemed a lot like a ploy for Bruce to keep his enemies closer, and Bruce responded that this was Harvey's chance to be part of the solution to the problem, because for evil to flourish, good men have only to do nothing. Before long, Harvey, Jim Gordon, and the Batman were working together to bring down the McKillen sisters from the right side of the law.

Having followed the tunnels to their end, Batman emerges violently in the back of a local bar. While there, the TV begins broadcasting the Gotham Family's impending live execution of Two-Face.

Retrieved from "https://heykidscomics.fandom.com/wiki/Batman_and_Robin_Vol_2_27?oldid=1412650"
Community content is available under CC-BY-SA unless otherwise noted.