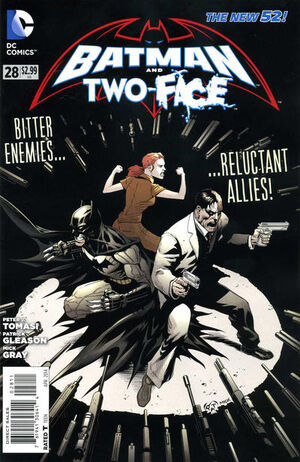 Always putting out fires, Batman -- Even when some things are meant to burn!

Appearing in "The Big Burn: Inferno"Edit

Synopsis for "The Big Burn: Inferno"Edit

Two-Face has been captured by the Gotham City crime families, and his execution is intended to be broadcast on live TV as an example, showing their rejection of the pervasive super-powered and freaky crime element in the city. Hoping to save Harvey Dent's life, Batman demands of his prisoner Erin McKillen where Harvey was taken. Finally, she admits that he is being held at the old Courthouse, and Batman speeds toward it.

As the broadcast continues, Batman zooms in on the details of the video, and realizes with some annoyance that he has lost precious minutes because Erin lied to him. Two-Face is being held at the condemned Gotham Studios. She had lied because she wanted Harvey dead. Annoyed, Batman ejects her from the Batmobile, and leaves her to the GCPD. By the time Batman arrives at the studios, the kidnappers have already set the building on fire, expecting Two-Face to burn alive on camera.

Amid a hail of bullets, Batman swoops down to rescue him, taking out the camera man with a Batarang. He tosses Harvey his old coin, reminding that he, Harvey, and Jim Gordon had once worked together on a mission of law and order, and it is a disappointment to him that he gave up the fight, and succumbed to pain instead of turning that pain into something good. Sarcastically, Two-Face responds that as Bruce Wayne, becoming Batman is a shining example of turning pain into something good.

Batman pauses, as he realizes that Harvey has known who he was all along. Harvey reminds that Bruce had pushed him into becoming the D.A., and that gave him a front-row seat to his wife's murder. He has had to fight himself for all these years just to keep his old friend alive. Justice was served, as far as he is concerned. The sentence is time served as Two-Face. As much as Bruce wants to believe that Harvey Dent is still inside, Two-Face denies it. Batman reminds that a coin isn't two-dimensional. Between the two sides is an edge; the spot where the two sides meet. It is the side that bonds the opposite Harvey Dent to Two-Face, and both men will have to find a way to embrace it.

After untying Two-Face, the man leaps up, grabbing one of his kidnappers' flamethrowers, and setting fire to them all. Soon, the fire becomes overwhelming, and Batman is forced to make an escape through the studio's retractable roof. From there, he blasts a hole in the side of the over-hanging water tower, and floods the inferno. Derisively, Two-Face shouts up that some things are meant to burn.

Years ago, Harvey Dent had attended one of Bruce Wayne's parties, where he introduced Harvey to Gilda Gold with the intent of setting them up. Bruce excused himself to handle a fight between the McKillen twins, leaving Harvey and Gilda to get acquainted. It wasn't long before they cut through the small talk to romance.

Outside the studio, Jim Gordon hears the rumbling of water behind the studio door, and before he can get units positioned, the he is swept away by the torrent of water and Two-Face with it. Recovering quickly, Two-Face grabs one of Jim's guns and shoots him in the shoulder. Struggling to sit up, Jim tells Harvey that he was once one of the best of them. Two-Face responds that the whole time, it was Jim who was the best of them - and still is. That's why he is offering Jim the choice to let him go or bring him in.

Jim responds that, for him, that isn't a choice at all, and Two-Face concedes that he must make the choice, then. Heads; he surrenders. Tails; Jim dies. When he flips his coin, it slips from his grip, and rolls away, remaining edge up. Unsure of how to react, he puts the gun to Jim's head, but hesitates. Before he can decide for himself what to do, a Batarang knocks the gun from his hand. Desperately, Two-Face takes the opportunity to escape on a police motorcycle, as Batman tends to Jim's wounds, despite the Commissioner's warnings that Two-Face is more important.

Later, Erin McKillen establishes herself as a leader among prisoners. Two-Face, meanwhile, returns to his ritual of flipping his coin to see if he lives or dies. This time, however, he doesn't flip it, but he spins it on its edge, putting the gun to his bad side's temple, and staring into a photo of his lost wife. Even as the coin keeps spinning, he pulls the trigger, spraying blood over the photo.

Batman returns to the GCPD Headquarters with a replacement for the destroyed Bat-Signal, warning Jim that Harvey Dent appears to have gone deep underground. Even without their old friend as their third soldier in the fight for justice, Batman reminds Jim that the two of them, at least, are fighting this war together.

Retrieved from "https://heykidscomics.fandom.com/wiki/Batman_and_Robin_Vol_2_28?oldid=1412651"
Community content is available under CC-BY-SA unless otherwise noted.