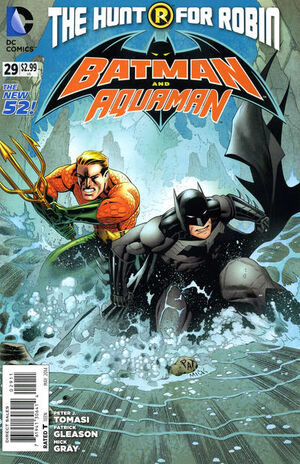 I don't envy you having to smash in the face of your child over and over... but as we both know, being a parent at times means having to make difficult choices.

Appearing in "Devil and the Deep Blue Sea"Edit

Synopsis for "Devil and the Deep Blue Sea"Edit

Since Two-Face disappeared, Batman has found no trace of him, and in the meantime, he is instead following the coordinates left by Damian for the island on which he was trained. Bruce feels he is closing in on the location, given that the decomposed corpses of the teachers Talia kidnapped for Damian are peppering the subaquatic landscape in front of the Bat-Sub. Alfred wishes he had been allowed to come, but Bruce reminds that one stowaway was enough, noting that, somehow, the dog Titus had found his way onto the sub. In any case, Bruce finds his progress hindered by a visit from Aquaman.

Arthur wonders what exactly Bruce is doing down there, and Bruce explains that Ra's al Ghul dug up the bodies of Damian and Talia from his own back yard, and the trail has led him here. Arthur offers that he came following the sound of a whale's screaming. The sudden cessation of that sound, though, signals the arrival of Ra's al Ghul's men.

Within his chambers, Ra's realizes that he has been found out earlier than he wanted to be, and launches his contingency plan in order to prevent further attention from the rest of the Justice League. He prepares to leave, but ensures that a parting gift awaits the detective.

Batman and Aquaman storm the beach, breaking through the island's defenses of Man-Bats, only to find that the source of the whales' screaming was on the island. Ra's al Ghul had ordered the hunt of whales, creating genetically altered super-humans in the wombs of sperm whales. This being just one of a probable many plans to rebuild the League of Assassins. Aquaman swears vengeance on the whales' behalves.

Inside the compound, they find that Ra's is wiping the hard drives clean, preventing data recovery, even as a message from Ra's plays over the intercom, chastising Batman for failing to prevent the deaths of Damian or Talia within the city he swore to protect. As his parting gift, he has left Batman the Heretics to keep him entertained. Batman reels as he sees all of the grotesque and mutated failed clones of himself; failed Damians.

As they fight for their lives, Batman warns Aquaman not to kill any of these monstrosities. They are too developmentally malformed to comprehend what they had done to those whales in being born. Suddenly, Bruce realizes that if the Heretics were born of a whale's womb, Arthur might be able to telepathically link up with them. He leads them out into the ocean, where an unharmed whale breaches, and swallows them whole. Batman, meanwhile, fights his way to Ra's escape aircraft.

He sees Talia and Damian's bodies stored within it, and clings to the fuselage from outside as the plane takes off. Though Ra's plans to go to Paradise Island, he is nearly surprised to see Batman pounding on the cockpit's windshield. From outside, Batman screams for Ra's to give back his son, but the Demon's Head responds that he is blood of Damian's blood, and the boy is in good hands. He orders the plane to tilt its angle, causing the wind shear to rip Batman from his purchase, and drop down into the sea.

Luckily, Aquaman is there to catch him. Arthur explains that all of the Heretics are alive, having been taken down to Atlantis for safe keeping, by a whale.

Later, Batman visits Wonder Woman in London, begging for a ride to her home island of Themyscira.

Retrieved from "https://heykidscomics.fandom.com/wiki/Batman_and_Robin_Vol_2_29?oldid=1507269"
Community content is available under CC-BY-SA unless otherwise noted.