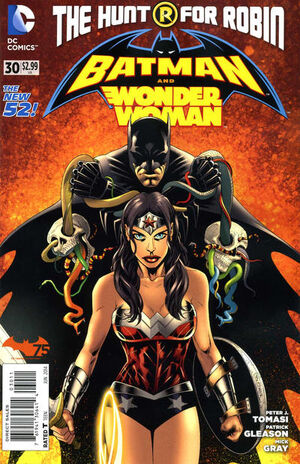 Damian turned away from the dark path his mother put him on... made a choice just like this creature did to walk in the sun, no matter the cost.

Appearing in "Paradise and Wonder"Edit

Synopsis for "Paradise and Wonder"Edit

Upon arriving in Themyscira, Batman is held at knifepoint by the Amazon Aleka, who is distrustful of men in general, and is certainly unwelcome to the idea that a man's son might be on Paradise Island. Annoyed, Wonder Woman intervenes, warning Aleka to take her knife away as she explains that the son he spoke of is dead, and his body was stolen by another. That thief is Ra's al Ghul, and he believes that there is a Lazarus Pit somewhere on the island. Aleka's doubt and hatred of men brings she and Diana to blows, until Batman rips off his cowl and challenges her to fight himself. Aleka relents, warning that they have only until dawn to find the Lazarus Pit - if it exists.

Meanwhile, Ra's al Ghul congratulates himself for having discovered the one Lazarus Pit that straddles two worlds; that of man, and that of the Amazons.

Diana leads Batman to the Oracle of the Amazons, who demands gift in exchange for answers. Begrudgingly, Batman offers her a batarang, and she is satisfied enough with it to warn that the pit they seek lies within the Cavern of Neekta - the cavern of night. She explains that legend has it those who enter the cave will be found by the goddess Neekta and their souls will be turned dark. For that reason, Zeus sealed the cavern, and erased its existence from everyone's memories but hers.

Ra's and is men find the pit inactive, and so he orders that the crystal he brought be used to re-activate it. With the pit beginning to bubble into activity, Ra's orders that his daughter and grandson be brought to him, only to take the sharpened edge of a batarang in his shoulder as Batman warns him not to carry through with his plan. Plucking the weapon from his arm, Ra's comments that Batman persists in being the thorn in his side. Wonder Woman demands to know how he managed to find Paradise Island, and he comments that it took him thousands of years, given that the directions were incomplete - begging the question: where did he get directions from?

Ra's explains that a Spaniard travelling to America who had spoken of nude women boarding a vessel he'd only just managed to escape after they offered themselves to the crew, and then murdered them. He had covered himself in spilled blood from a shipmate, and feigned death as he was tossed over the side of the ship. He had followed the women back to their home island, and watched in secret as they burned the ship and celebrated. The man had happened to be a cartographer, and as such, he reconstructed his journey on paper - but none would believe his tale until he met Ra's, who promptly murdered him upon receiving this information.

Batman warns that this place is not a Lazarus Pit - it is something entirely different. Mockingly, Ra's responds that this is one of two pits situated at the nexus of the mystical world. This one will purge the dead of their memories of the past, and they will become as new gardens, to grow without intrusion. Talia and Damian will come to believe and act as he does - and they will think on Batman and his kinds as weeds to be eradicated. Before he can order the bodies submerged, though, a great beast explodes through the surface of the pit's fluids.

In the confusion, Diana hurls Batman toward Damian's sarcophagus, but he loses grip on it as the creature brings the roof of the cave down on everyone. Ra's and his Man-Bats grab both sarcophagi and fly through the hole in the roof, leaving Batman and Diana to deal with the Neekta. Wonder Woman wraps her Lasso of Truth 'round its neck, dragging it to the ground, and demands to know what it truly desires. It explains, under the lasso's influence, that it only wants the light, after being locked in darkness for so long.

Diana agrees to bring the creature out into the sunlight, through Zeus' barriers. On the beaches of Themyscira, Neekta's hunger subsides, and it disappears. Thinking on how this creature turned away from darkness, Bruce is reminded of his son's decision to do the same, and reminds Diana that he needs to set Damian's body to rest.

Retrieved from "https://heykidscomics.fandom.com/wiki/Batman_and_Robin_Vol_2_30?oldid=1514840"
Community content is available under CC-BY-SA unless otherwise noted.