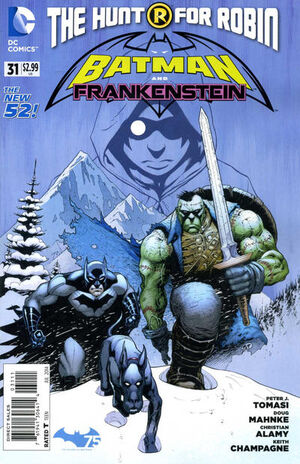 Hello Batman. You left me in pieces last time we met... maybe that's how I should leave you this time around!

Appearing in "City of Cold"Edit

Synopsis for "City of Cold"Edit

On the frozen Yellow Sea, a pair of ice-fishermen are startled suddenly when the Bat-sub crashes up through the ice from beneath their feet.

Within hours, Batman is in the Himalayas of Tibet with Titus, and to his horror, he discovers that Nanda Parbat is gone. Before he can get closer to the crater to investigate, he finds himself in the crushing grip of Frankenstein. The creature is not happy to see him, given the friction that occurred between them on their last encounter. Batman pleads that he had allowed himself to be blinded by his grief then, and he has since changed his mind about trying to resurrect his son. All Frankenstein demands is an apology, which Batman provides - and to have Titus stop chewing on his leg.

Frankenstein explains that Nanda Parbat was once a home to mystics and demigods who saw themselves as protectors of humanity, but his experience was of yet another degrading laboratory where Felix Faust and Nick Necro enacted experiments on the world's most powerful mages, holding them hostage so that they would become living weapons only they could control. The battle that saw his escape resulted in the spirits of Nanda Parbat carrying their entire city into another dimension so that its power could never again be abused. He had returned to find some kind of solitude and fortitude - instead, he found Batman.

Batman explains that he came to Nanda Parbat because his son's body and his mother's were secretly exhumed by Ra's al Ghul, who placed them into some kind of strange sarcophagi. Batman tracked him around the world to this spot. Unfortunately, his tracker is limited by a 48 hour life-span, and only six hours remain before he will lose the signal. Frankenstein remains worried that Batman might harbour a wish to bring Damian back by using the Demon's Head's methods, but Batman insists that all he wants is Damian to be at rest so that he can rest. Convinced, Frankenstein agrees to help, by Melmoth's beard.

Nearby, Ra's al Ghul has activated the dormant Lazarus Pit and has already begun to lower one of the two sarcophagi into the pool.

As they trek across the snow, Batman admits that he once was at Nanda Parbat several years ago to take part in the Thogal Ritual. After weeks of deep and dangerous meditation, all he learned was that death is a waste of time. Suddenly, the pair are set upon by a group of creatures. As he defends himself, Batman notices defensive wounds on their bodies, and realizes that they were recently under attack by something else, and they are just trying to prevent further injury. Batman and Frankenstein lower their weapons, demonstrating their intent for peace. When the creatures relent, Batman takes the opportunity to draw out Ra's al Ghul in the snow so that he can ally with these creatures in their shared pursuit of a common enemy.

Together, Batman, Frankenstein, and the creatures find their way into the tunnels below where Nanda Parbat used to be, and into an ancient ruin. Unfortunately, they are too late to stop Ra's plans.

Retrieved from "https://heykidscomics.fandom.com/wiki/Batman_and_Robin_Vol_2_31?oldid=1507270"
Community content is available under CC-BY-SA unless otherwise noted.