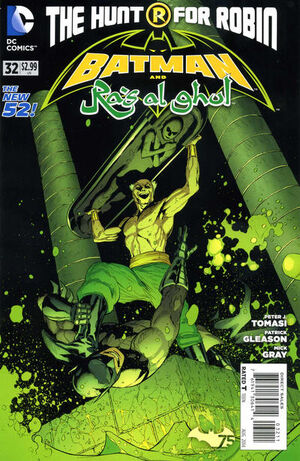 If you try to take Damian's body again I'm going to kill you and make sure you never come back.

Appearing in "Dark of the Son"Edit

Synopsis for "Dark of the Son"Edit

In the caverns hidden beneath the ruins of Nanda Parbat, Batman and Frankenstein have come upon Ra's al Ghul too late to prevent him from submerging his daughter Talia's body into the rejuvenative Lazarus Pit. Though he keeps her body within her sarcophagus, explaining that this particular pit bestows distinctive gifts with distinctive rules. The resurrection of both Talia and Damian in this pit will place them both under Ra's al Ghul's control - and he can think of no better revenge for the pain Batman has caused his family then to make Batman watch his former lover and son carry out the al Ghul legacy.

Ra's explains that the pit beneath Nanda Parbat had belonged to the lost city of Nishapur, where sorcerers attempted to open portals to Hell itself. A band of mages joined together to seal off the city beneath the new city of Nanda Parbat, to reflect the balance of good with evil. It was only Nanda Parbat's recent disappearance that allowed Ra's to venture down into Nishapur and activate the pit using a crystal that Talia found long ago when she was constructing her island base. It was that crystal whose boundless energy was able to accelerated her son Damian's growth in the stasis chambers, and power her entire cloning operation without need for other sources of power.

Once Damian and Talia are submerged in this unique pit, their memories will be erased, and they will be raised from death. However, the rules require that the lifeless body remain immersed and untouched for 24 hours, which is why Talia's body must now remain in its sarcophagus. Unwilling to let his son go next, Batman lashes out, initiating a battle between his followers and Ra's'. In the confusion, Batman grabs Damian's sarcophagus and leaves Frankenstein to block Ra's al Ghul's path to follow him out into the snow.

As he hurries to get the boy inside the Batplane, he is started by the crunch of Frankenstein's body slamming into the wing of the vehicle. Ra's has caught up with him, and warns that he will not simply allow Batman to escape with his grandson. He will wait forever if that's how long it takes to ensure the rebirth of his legacy - because he can. If necessary, everyone that Batman cares about will forever be at risk. Grimly, Batman responds that if Ra's tries to take his son's body again, he will kill him, and make sure he never finds a way to come back. The Demon's Head lunges at Bruce, admitting that he believes his threat, this time. As their followers gather 'round, both men warn them away. Their fight is personal.

After a violent struggle, it seems Batman will, in fact, kill Ra's al Ghul, but a sudden boom distracts him, as Glorious Godfrey and a retinue of Parademons appear with salutations from Apokolips.

Retrieved from "https://heykidscomics.fandom.com/wiki/Batman_and_Robin_Vol_2_32?oldid=1514843"
Community content is available under CC-BY-SA unless otherwise noted.