Start a Wiki
Part of the 'Batman and Robin: Robin Rises' event 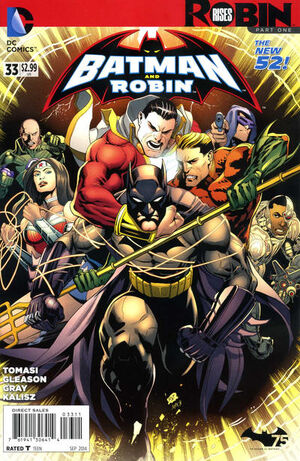 Cold, do you really think putting that against my head's--A GOOD IDEA?!

Having just watched his son's sarcophagus carried away to Apokolips via Boom Tube, Batman demands to know why he can't follow the Parademons who took it. Sternly, Aquaman explains that the Justice League can't go off-planet on personal missions, leaving the Earth vulnerable. Cyborg reminds that they know so little about Apokolips that it would be foolish to go there so soon. Batman responds by using Vic's suit to short out the League's transportation devices, and go back to the Justice League Satellite by himself. Frustrated, the League attempts to find a way to follow him, and Frankenstein decides he wants no more to do with any of this.

On the satellite, Batman accesses a vault which contains a specialized Batsuit called the Hellbat, but when he attempts to have the suit released to him, the computer denies him access. The League has already found their way back and Batman sees that they intend to stand in his way. In response to their recrimination, he reminds that they all play God every day, and there is no justification for treating the idea of bringing his son back to life like a crime against nature. Aquaman reminds that catching Darkseid's attention at this time is dangerous. They're not ready. Batman responds that if Darkseid has taken his son, they already have his attention. He reminds that his Hellbat suit is designed to face threats like Darkseid and Wonder Woman interjects that the suit's creation was a team effort. Superman forged it in the sun, and then each member of the league contributed to its creation using their own unique abilities. It was designed to keep him safe - the only one without powers.

Batman realizes that this is an intervention, and grabs Captain Cold's Cold Gun to attack Cyborg, prompting the others to hold him back. As he struggles with them, Batman dares them to look at what they are doing. Finally, he stops fighting back and expresses his resignation.

On Apokolips, Glorious Godfrey presents the retrieved Chaos Shard to Kalibak. Darkseid's son is disinterested with the sarcophagus he also brought, but Godfrey explains that it had emitted a similar energy signature to the shard's, and he thought it prudent to bring it. Kalibak decides that if it bears the same energy signature, it too can be used to fuel the Chaos Cannon.

Standing among the fireflies at Damian's open grave, Bruce loses his composure and patience and smashes the gravestone with his spade. He feels Superman watching him, and his friend apologizes for the way things got so out of control. Bruce admits that his position is selfish, and that he understands the League's reasoning. It was unlikely he'd survive going it alone. Clark expresses his understanding, and offers his help, in the unlikely event that Bruce asks for it.

When Superman leaves, Bruce calls his family together and meets them in the Batcave to prepare for their mission.

Retrieved from "https://heykidscomics.fandom.com/wiki/Batman_and_Robin_Vol_2_33?oldid=1520013"
Community content is available under CC-BY-SA unless otherwise noted.