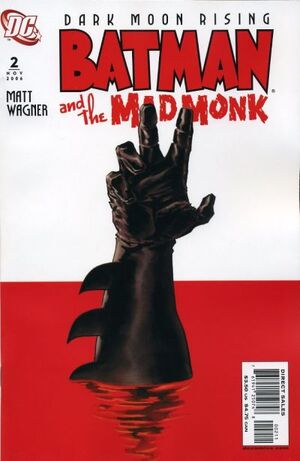 Dala is leading the blood communion for the Brotherhood of Eternal Night. Her victim wakes up, chained to a stone altar, as The Mad Monk enters. he chews open her neck, and the blood runs out into a chalice, draining her completely. Dala and the Brotherhood all drink.

In Wayne Manor, Julie Madison tells Bruce Wayne that she's worried about her father. She explains that he's a very proud man. The she asks Bruce how he got the four long scratches on his chest...

Norman Madison visits Sal Maroni to discuss his debt. Maroni tells him that Batman squared his debt, much to Norman's confusion. Maroni's thugs throw him out.

In Harvey Dent's office, Batman and Dent discuss the action against Falcone- and Maroni. Batman explains that he's trying to locate a shipment of heroin Maroni lost. Dent tells him that if he can getting evidence Maroni was involved, he can get Maroni imprisoned for a long time, and possibly give information up as well.

Outside Wayne Manor, Julie is on stakeout. Despite Bruce saying he had business, she hasn't seen him leave. She also doesn't believe the scratches were from a rake.

James Gordon has been called to the scene of the discovery of another body, throat torn out and completely drained of blood. It's the girl Dala sacrificed earlier. The other officer, Reynolds, says that he thinks Gordon and Batman are doing the right thing, just before Batman arrives. Gordon despairs to think that there's a lunatic serial killer stalking the city. Batman notices bruises and scrapes that indicate that the girl had been tied to a hard, rough surface. He deduces that the killings seem ritualistic. They find tyre tracks. Batman takes a sample of the tread and residue, and leaves.

Dala asks the Monk when she can harvest the blood. She and the rest of the Brotherhood are impatient for eternity. The Monk tells her to wait a little longer.

In the Batcave, Batman deduces that the vehicle that dropped off the girl's body was a hearse. The chemicals from the sample are from perfumes, and a neurotoxin used in animal sedatives. Alfred Pennyworth reminds him that he has a board meeting that afternoon, and sends him to bed.

Julie arrives home, to find her father has loosened the lightbulbs, and is sleeping on the couch. In his dreams, Norman is being pursued by bats.

Batman has traced the hearse to a disused factory. When he arrives, several delinquents are meeting, and discussing how the Brotherhood doesn't seem to be delivering. Then Batman drops.

Retrieved from "https://heykidscomics.fandom.com/wiki/Batman_and_the_Mad_Monk_Vol_1_2?oldid=1411060"
Community content is available under CC-BY-SA unless otherwise noted.