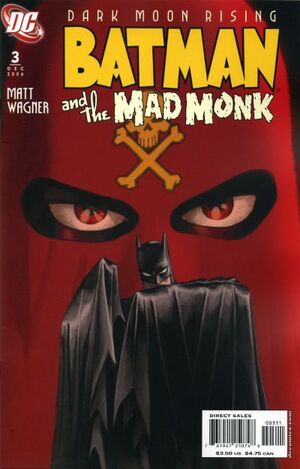 Batman is interrogating on of the low-life members of the Brotherhood of Eternal Night, but he's too afraid of the Monk to talk.

Julie Madison goes out with two of her friends to try and feel better about her father's difficulties. Although they aren't interested, another woman in the bar, Dala, over-hears and offers to help. Her boyfriend offers confidential counselling to the rich and influential. She gives her a business card- with the Monk's name (Niccolai Tepes) on it.

When Sal Maroni arrives back at his office, he finds Carmine Falcone waiting for him. Falcone says that Norman Madison came to him, about a debt owed to Maroni, and tells Maroni to deal with it.

Julie comes home to find the locks changed on all the doors.

Batman is concentrating on the missing heroin shipment, but cannot find it, and is preoccupied by the murders committed by the Monk.

Julie goes to see Dala's boyfriend, the counselor, and finds an impressive castle as his home. Niccolai carefully listens while she explains about her father's paranoia, and that she's worried he won't admit he needs help. Julie drinks some drugged tea, and finds herself remembering the night she met Bruce Wayne. later, Dala asks Niccolai why he let Julie go. He says it was so she can learn her father's business secrets to enrich the Brotherhood.

Later, Julie is on a date with Bruce. She removes her scarf, revealing a vampire's bite-mark.

Retrieved from "https://heykidscomics.fandom.com/wiki/Batman_and_the_Mad_Monk_Vol_1_3?oldid=1411061"
Community content is available under CC-BY-SA unless otherwise noted.