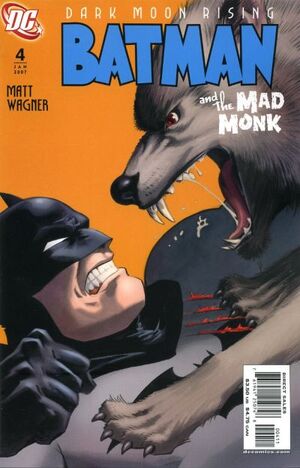 One of the Brotherhood of Eternal Night has been locked in an Iron Maiden, as punishment for being questioned by Batman, even though he didn't answer. The spike fatally wound him, then the Monk feeds him to his wolves.

In Wayne Manor, Bruce researches vampire legend. He melts down some silver candlesticks, and re-molds them as batarangs.

Across town, Julie Madison wakes and answers fer phone. The voice on the other end tells her to come to the castle. She obeys without question, though against her character. Watching, Batman wonders where she'd be going after three a.m. He follows.

James Gordon is dreaming. He sees his family threatened, because of his association with Batman. he wakes, and worries that it may come true.

Batman follows Julie to Rallstone Castle. When he tries to sneak in, he is attacked by wolves. He subdues one, but is forced to kill the other after it sinks it's teeth into his leg and gets a taste. He binds the wound, but feels dizzy from some of the gas he used to subdue the wolf.

The Monk is drinking from Julie, when Dala interrupts to tell him that something disturbed the wolves. He tells Julie to get her father's account numbers and passwords, then goes to investigate the disturbance.

Below, Batman triggers a trick stair, and is sent headlong into a containment cell. A slab drops over head, and spikes come out of the walls, which start to close in.

Retrieved from "https://heykidscomics.fandom.com/wiki/Batman_and_the_Mad_Monk_Vol_1_4?oldid=1411062"
Community content is available under CC-BY-SA unless otherwise noted.