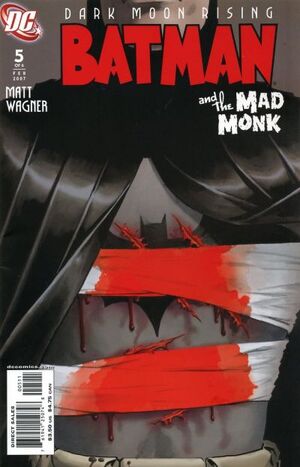 The Mad Monk and Dala are looking at the trap that has just caught an intruder, but they cannot see who it is. They decide to wait until the trap reopens to find out who it was. Meanwhile, in the trap, Batman wedges batarangs under the sliding walls to slow them. He buys enough time to blow open the trapdoor with plastique and escapes, sustaining many deep scratches on the spikes on his way up and out. He sees that Julie Madison's car is gone, and decides that he no longer has to stay at the castle.

James Gordon is waiting on the roof of Police Headquarters, waiting for Batman to answer the pager. He wonders why it's taking him so long. When Batman appears, he sees the injuries, and Batman tells him he's fine. Gordon says that he doesn't like the secrecy with the pager. He tells Batman that they i.d.'d the Monk's victims, and came up with a single point of correlation: they were all only children.

Batman checks on Julie, and finds she's sleeping peacefully. He goes home to get his wounds sorted. Norman Madison watches him leave, in paranoid terror.

In the Batcave, Alfred Pennyworth sews up Batman's gashes while Batman researches Rallstone castle. Although he is reluctant to believe in actual vampires, he is willing to consider it. He retires for the night.

Norman has a talk with Julie. He tells her that he may have to do something disastrous, and gives her a copy of his will and documents about his business. He thinks that saying a possible goodbye to her was the hardest thing he's ever done, and he has to do the second hardest. Julie scarcely notices- the Monk's treatments have left her confused and sleepy.

The Monk and Dala are just about to go to sleep when Julie arrives, with her father's bank details. He knocks her out, and tells Dala to summon the Brotherhood.

Bruce wakes up from a dream about his dead parents, and is sure Julie is in danger. He goes out, back to the castle.

At the castle, the Monk tells the Brotherhood of Eternal Night that he will now make them immortal, and the final sacrifice is Julie.

Retrieved from "https://heykidscomics.fandom.com/wiki/Batman_and_the_Mad_Monk_Vol_1_5?oldid=1411063"
Community content is available under CC-BY-SA unless otherwise noted.