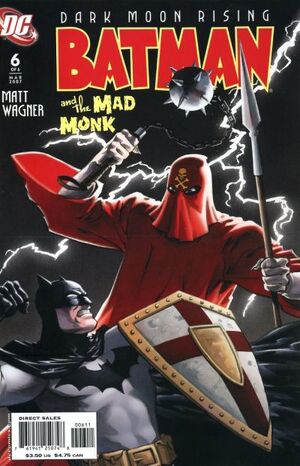 Police scanner reports a warehouse full of bodies. Seemingly poisoned. All bearing some semblance of a rictus-like grin, even in death. Gordon's bound to be there.

The Mad Monk's vampire cult has captured Julie Madison and is preparing her for sacrifice. Batman crashes through the wall of the castle with the Batmobile, sending the cultists scurrying. Sleeping gas begins pouring out of jets from the Batmobile, greatly thinning out the pack. Batman ejects himself from the driver's seat and dives into the fray while Dala and the Mad Monk look onward in shock.

Batman slings two batarangs at the Monk and his assistant, driving them back long enough for him to reach Julie. The Monk quickly recovers however and grabs a spear and a mace from a nearby wall. To defend himself, Batman finds a shield and uses it to disarm the Mad Monk. Realizing that he cannot defeat the Caped Crusader, the Mad Monk turns to flee.

Batman chases him up to the roof for a final showdown, while Dala attempts to recapture Julie Madison. Rain pours down hard on both of them and a bolt of lightning erupts striking the Mad Monk. The Monk falls from the roof of the castle, seemingly to his death.

Batman returns inside just as Dala is preparing to sacrifice Julie. Madison manages to hold her own however, and strikes Dala with a broken piece of wood. Dala falls forward onto her own sacrificial blade and dies. To calm the hysterical Julie down, Batman reveals his true identity to her.

Meanwhile in Gotham City, Norman Madison decides to take drastic measures to get out from under the thumb of Boss Maroni. He encounter Maroni and his goons in a parking garage and opens fire on them with a revolver. Madison is a bad shot however and none of his bullets strikes their intended target. Maroni's men return fire, killing Norman.

Some time later, Julie Madison writes Bruce Wayne a note indicating that she is breaking up with him. Rather than live under the shadow of all of the ugliness that has enshrouded her life, she decides instead to leave Gotham City and join the Peace Corps.

Retrieved from "https://heykidscomics.fandom.com/wiki/Batman_and_the_Mad_Monk_Vol_1_6?oldid=1492016"
Community content is available under CC-BY-SA unless otherwise noted.