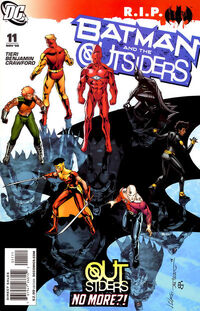 Title(s)
Batman and the Outsiders

Batman -- your precious Batman -- he left us high and dry! It's because of him we were left open to a trick like this! So, really... what damned teammates are you talking about? There are no teammates. This is it. The end. The end of the Outsiders. Deal with it.

Outsiders No More is an Outsiders storyline written by Frank Tieri with illustrations by Ryan Benjamin. It is part of the Batman R.I.P. crossover. The story follows Chuck Dixon's unfinished arc The Snare, which was interrupted and never completed. Following this arc, the series is renamed Outsiders beginning with Peter Tomasi's arc The Deep.

The Outsiders deal with Batman's recent disappearance. Superman finds Green Arrow alone in Wayne Manor drinking Batman's alcohol. Green Arrow insists that Batman is gone for real this time, and shows Superman the Batcave in ruins to prove it. The Suit of Sorrows has also been stolen out of its container. Batgirl visits Penguin in the Iceberg Lounge, but Penguin has decided to no longer be an informant. Johnny Stitches taunts Batgirl that Intergang now runs the city, and she knocks him out of his chair. In Arkham Asylum, Jeremiah Arkham tells Grace and Metamorpho that Joker distributed pamphlets telling the inmates Batman is dead. Jim Gordon is disappointed when Geo-Force and Katana answer the W:C:DC:Bat-SignalBat-Signal. Thunder receives counseling from her father Black Lightning. The Outsiders wonder whether or not they can continue as a team, and Batman appears on a video screen in their penthouse.[1] The image of Batman tells them he is sending a code to REMAC so they can find him and help out. Green Arrow assumes this is a trap, but Batgirl suggests that the code will still lead them to whoever's responsible. REMAC tries to decrypt the files and they're activated anyway. REMAC goes haywire and begins attacking the team, until he explodes and destroys the penthouse. In the aftermath, Metamorpho is deconstituted, Thunder is in a coma, and Salah Miandad is dead. Grace blames Batgirl and insists that they are not a team anymore after a tragedy like this. They attend Salah's funeral, where Man-Bat offers his counsel to Batgirl. Batgirl receives a video from Simon Hurt of the Black Glove laughing that he destroyed the Outsiders. Batgirl vows that she will put together a new version of the team.[2]

Gotham's super-villains return after the events of Salvation Run and discover that Intergang has taken over their city. Without Batman to stop them, they go on a merry killing spree clearing out Intergang's shape-changing thugs. Batgirl approaches Man-Bat for help while he's cleaning Intergang out of the Iceberg Lounge. Vigilante targets Intergang headquarters and shoots most of the guards on premises. Spoiler has been doing surveillance on Intergang, and she stops Vigilante from killing Johnny Stitches. Batgirl approaches Spoiler and Vigilante to make them an offer. Batgirl believes it is impossible to replace Batman, but she is trying to establish a "Network" of heroes who mirror his specific skills. Alfred notices that many of these heroes are looking for redemption, and suggests that Batgirl is subconsciously looking for kindred spirits.[3] Batgirl attempts to recruit the Riddler to her network for his detective skills. Nightwing believes that Batman would not approve of people like Vigilante in this network, and tells Batgirl to stop. Batgirl and Nightwing fight through the streets until they're interrupted by Alfred in the Batmobile. Alfred tells Nightwing that whether or not Batman would approve, their responsibility to protect Gotham is greater than Batman. Batgirl and Nightwing reconcile, and Nightwing agrees to help put the network together. Elsewhere, it's revealed that the Suit of Sorrows was stolen by a new Azrael who is spying on them.[4]

Retrieved from "https://heykidscomics.fandom.com/wiki/Batman_and_the_Outsiders:_Outsiders_No_More?oldid=1549190"
Community content is available under CC-BY-SA unless otherwise noted.