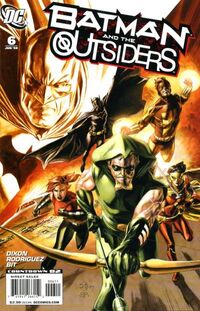 Title(s)
Batman and the Outsiders

Collected in
Batman and the Outsiders: The Snare

The Snare is an Outsiders storyline written by Chuck Dixon with illustrations by Carlos Rodriguez, Julian Lopez, and Ryan Benjamin. It is the second and final arc of Dixon's run on Batman and the Outsiders, which was left unfinished for editorial reasons. This arc follows Dixon's The Chrysalis, and is followed by Frank Tieri's Batman R.I.P. crossover Outsiders No More.

Metamorpho is stranded on the moon, and has Sapphire Stagg contact Batman. Metamorpho reports that he is on a giant space station developed by Mister Jardine and populated with zombified workers. To rescue Metamorpho, Batman decides that the Outsiders will steal a rocket in Mongolia. Batgirl, Geo-Force, Grace, Green Arrow, and Katana are sent to infiltrate a military base. They are attacked by the Mongolian super-heroes Angry Wizard, Barefoot Tiger, and Dragonfire. Batgirl and Geo-Force escape. Grace, Green Arrow, and Katana are captured.[1] Salah Miandad is taken to the Batcave. Metamorpho hijacks a ship to escape, and realizes that the space station is a giant gun. Grace, Green Arrow, and Katana are tortured by the Chinese government for information.[2] The captured Outsiders are put in front of a firing squad, but Batgirl rescues them with Katana's soulsword. Nightwing and Thunder are sent to rescue them with Salah remotely controlling REMAC. They defeat the Chinese army and escape using a hacked JLA Teleporter. Green Arrow decides to quit the team. Metamorpho crashes into the international space station and reports that Jardine is firing a laser at the moon.[3] Metamorpho is arrested, but he escapes through a toilet. Francine explains that Jardine has created a sea inside the Moon. Batman brings in Looker to help interrogate one of the brainwashed astronauts who worked on the space station. The astronaut dies, and they discover that his brain was taken over by an alien consciousness. This leads them to an underground night club in Gotham City, which is charging to have a Bloodlines Parasite turn customers into New Bloods.[4] Francine Langstrom is reunited with her husband Kirk Langstrom. The Outsiders attack the super-villains controlling the parasite, and the parasite escapes in the battle. Batman latches onto the parasite and is carried away into the distance. Salah wires his brain to directly control REMAC, and accidentally traps his consciousness inside REMAC.[5]

Retrieved from "https://heykidscomics.fandom.com/wiki/Batman_and_the_Outsiders:_The_Snare?oldid=1549302"
Community content is available under CC-BY-SA unless otherwise noted.