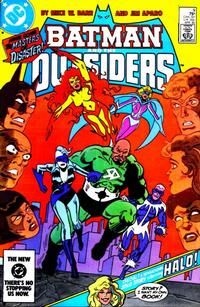 You're going to give us all your money... or you'll learn why they call us the Masters of Disaster!

Appearing in "Enter: The Masters of Disaster"Edit

Synopsis for "Enter: The Masters of Disaster"Edit

Appearing in "Halo in: Battle For the Band"Edit

Synopsis for "Halo in: Battle For the Band"Edit

Halo recounts a tale about how she stopped a bunch of kids from a rival school from kidnapping the head of the marching band.

Retrieved from "https://heykidscomics.fandom.com/wiki/Batman_and_the_Outsiders_Vol_1_9?oldid=1410994"
Community content is available under CC-BY-SA unless otherwise noted.