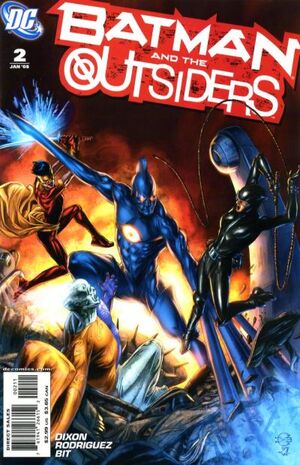 I am samurai. I am not a conniving, murderous ninja.

At Jardine Tower, the Outsiders continue their battle against this new, completely artificial breed of OMAC. Metamorpho encases Catwoman and Katana in a body-sphere to protect them from the OMAC's initial attack. It then turns it's sights on the building's security staff, but Katana and Metamorpho coordinate their attacks, and succeed in doing substantial damage to the unit.

Back in Gotham, Batman coordinates the team by way of the Martian Manhunter. J'onn gives him an update on the situation. While analyzing the threat, Batman also takes time to argue with Thunder. He doesn't feel that she is qualified to remain with the Outsiders. In a bout of anger, she kicks out the door to their surveillance van and leaves.

In Central City, Grace shows up and gives her teammates some additional muscle. The OMAC grabs her, and prepares to kill her, but Metamorpho turns his arm into an electrical outlet and plugs himself into a socket. Grabbing the OMAC, he sends an electric charge through the unit that shorts it out. With the OMAC out of commission, the Outsiders regroup and meet back at Gotham City.

That evening, Thunder gathers with her former teammates and expresses her issues with Grace. Grace leaves her alone on the balcony to collect her thoughts. Moments later, Batgirl appears on the balcony and kicks Anissa through the window. As the other Outsiders stare with a look of shock on their faces, Batgirl replies, "I was invited".

Retrieved from "https://heykidscomics.fandom.com/wiki/Batman_and_the_Outsiders_Vol_2_2?oldid=1411020"
Community content is available under CC-BY-SA unless otherwise noted.