Batman in the Sixties 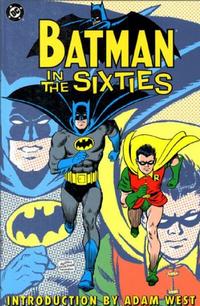 This trade paperback collects seventeen Batman tales from the 60's. The stories alternate from outrageously offbeat to completely realistic. The Dynamic Duo is joined by Batgirl and Bat-Mite as they go up against some of Batman's most classic foes, including the Joker, Clayface, Poison Ivy and Blockbuster.

This trade paperback also collect the story Catwoman's Catnapping Caper which was originally presented in Batman Kellogg's Special in 1966.

Retrieved from "https://heykidscomics.fandom.com/wiki/Batman_in_the_Sixties_(Collected)?oldid=1568486"
Community content is available under CC-BY-SA unless otherwise noted.