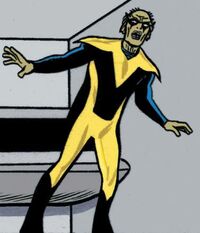 Battle-Lon was the father of Battlejack, one of the champions summoned to Impericon in order to fight the Queen of Nevers, who was held captive as a leverage to make Battlejack fight the Queen, and remained imprisoned even after his son had died in battle.[1]

When Dawn Greenwood was teleported to Impericon as the leverage to make the Silver Surfer fight the Queen, she made a plan of escape with which the prisoners broke free and started heading to the escape vehicles.[2]

After Battle-Lon and the other prisoners escaped Impericon while the Silver Surfer and Dawn confronted Zed in order to give the Queen of Nevers her heart back, they realized they could honor their loved ones by helping Dawn get the heart to the Queen. The prisoners fought the Gatekeepers and allowed Dawn to get the Queen's heart back to its rightful owner.[3]

Retrieved from "https://heykidscomics.fandom.com/wiki/Battle-Lon_(Earth-616)?oldid=1655700"
Community content is available under CC-BY-SA unless otherwise noted.