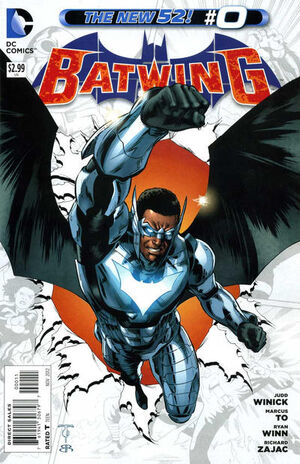 Forgiveness is not the edict that will guide me. I am a creature of rage. Forged in blood and the evil of the world that created me.

Reflecting on his childhood in a Child Soldier Rescue Compound, David recalls on how often he would escape the compound and venture to the city of Tinasha, where he would proceed to become involved in fights with men who attempted to steal more boys for the armies of different african warlords.

Batwing then recounts to just one year prior, when he is offered money recovered from robbery suspects by a fellow police officer. David declines because he believes that it needs to be returned to it's rightful owner. David later speaks with Rene Diallo how inept he feels the rest of the police force is. Rene is seen later driving with Matu Ba and talking about how David has the need to do good, but his job with the Tinasha Police Department is not going to be able to provide a long-term fulfillment of that goal. The vehicle they are driving in is suddenly attacked by the Metahuman Death Jack. David is seen racing through the hospital demanding to know what has become of the two people who have been parent figures throughout his life. A doctor reveals that Matu is only injured and may lose an eye, but Rene was placed on life support. David states that he wanted to stay and be with Rene, but he was drawn elsewhere.

Later, Death Jack is seen torturing a victim in an abandoned shack. David, wearing a mask, breaks in and beats Death Jack's men before being shot in the back with a ray from Death Jack's hand. David then attacks Jack and beats him, tying him up and leaving him outside the Tinasha Police department. David then visits Rene's grave, where he vows to make the criminals of Africa pay for what they have created, him. David then talks of how he hardly had to leave the city before he had found enough criminal activity to keep him busy at all hours of the day. He also speaks of times when he fought alongside allies, but even though he was with friends, he found his task becoming more and more difficult. He recounts a conversation he had with Matu. Matu tells David that he is going to die out there. He says that David is just a man, one man against an army of monsters. David says that, yes, there are monsters out there, but he is the monster who will destroy them all.

David is then found stopping an illegal arms deal ran by members of Blood Tiger's gang. Batman then shows up and tells David that he can help David's fight against crime. He then takes David and Matu back to the Batman Incorporated Armory in Gotham City. There they speak with Batman and Lucius Fox (Prime Earth) who tell of their goal to spread the idea of Batman worldwide, and that with their technology and guidance, David can become a soldier in the army that is Batman Incorporated. David and Batman then speak about why Batman chose David for this task. David points out that the fight will begin in Africa, and he'll need more than just grappling hooks, kevlar and metal darts to get the fight started. Batman then presents David with a more heavily armored, flight-capable suit. Batman asks if it will be sufficient enough to fight David's battles, to which David replies, Yes. It's a start.

Retrieved from "https://heykidscomics.fandom.com/wiki/Batwing_Vol_1_0?oldid=1412738"
Community content is available under CC-BY-SA unless otherwise noted.