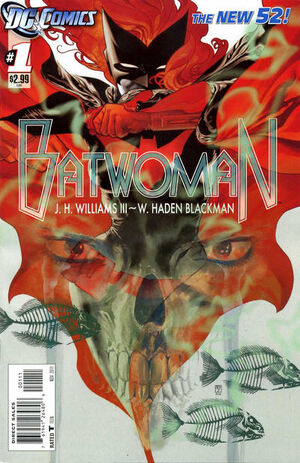 In "Hydrology," part 1 of 5, Batwoman faces deadly new challenges in her war against Gotham City's underworld – and new trials in her life as Kate Kane.

Who or what is stealing children from the barrio, and for what vile purpose? Will Kate train her cousin, Bette Kane (a.k.a. Flamebird), as her new sidekick? How will she handle unsettling revelations about her father, Colonel Jacob Kane? And why is a certain government agency suddenly taking an interest in her?

Retrieved from "https://heykidscomics.fandom.com/wiki/Batwoman_Vol_2_1?oldid=1660213"
Community content is available under CC-BY-SA unless otherwise noted.