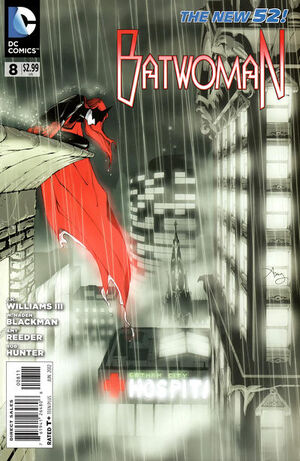 Oh, don't pretend that you haven't already crossed that line. Frankly, I don't know whether she's dating Kate Kane or Batwoman. Maybe you don't know, either.

Appearing in "To Drown the World, Part 3"Edit

Synopsis for "To Drown the World, Part 3"Edit

One month ago, Maro of Medusa had cornered a man named Rush, and sliced off his left hand with a butcher knife. After coming to, Rush found himself strapped to an operating table with Maro standing over him. She commented that the left hand is considered the feminine hand, and found it amusing that Rush had never used his left hand when he abused children. Fortunately for him, the Ashoth needed a man like him to join with. Together, Rush and the Ashoth would be able to indulge in their grimmest fantasies. She produced a strange, tentacled hook from an ornate box, and thrust it into the stump of Rush's wrist. A transformation began that made him all monster, and no man.

Two weeks ago, Jake Kane waited at the side of his comatose niece Bette for any sign that she might move again. He had felt her touch his hand earlier, and now wished for any sign that she might be soon to regain consciousness. Her doctor appeared, and Jake asked why she wouldn't move again. The doctor apologetically explained that any movement she might have made was likely involuntary, as the brain is an organ that needs time to heal when it has been injured. The doctor comments that Jake himself might benefit from talking.

One week ago, Agent Chase of the DEO had showed Kate Kane several photos of her girlfriend Maggie Sawyer out by herself. She noted that Maggie's flirtatious smile with a waitress and Kate's own conspicuous absence were telling. Chase warned that Maggie was to be the lead officer in charge of transferring the Medusa member known as Sune, and it was vitally important that Kate not allow Maggie to break their relationship off yet. Kate had been incredulous, failing to realize that her obsession with the case as Batwoman could have had a negative effect on her personal life. Chase explained that both Maggie and Kate were working on the same case, and Maggie may have found something that Kate did not. Reluctantly, Kate called Maggie and arranged a date, not wishing to mine her own girlfriend for information.

The next night, Maggie was transferring Sune to a safehouse via police boat, with a second boat headed up by Harvey Bullock as an escort. Maggie was startled by Harvey's sudden failure to respond to her radio messages, and was surprised to see that the Batwoman had taken out all of the men on his boat. She ordered her own men to open fire on the vigilante, but Batwoman's suit was bulletproof, and, after taking out the others, she destroyed Maggie's weapon.

Aside to Chase, Batwoman complained that Sune was meant to be on Bullock's boat, and Sawyer was not meant to be involved. Regardless, she headed for the cabin to retrieve the cargo, but was attacked again by Sawyer. Inadvertently, Batwoman injected Maggie with a tranquilizer meant for Sune, and with some frustration, watched as Maggie fell unconscious.

Later, Chase tricked a truck driver into leaving his vehicle unmanned, and knocked him out. With their other escape plans compromised, Chase ordered Batwoman and Sune to get to the truck before the circling helicopter above spotted them. After sneaking out of the nearby alley, Batwoman punched Chase in the face, angrily warning that she will never hurt Detective Sawyer or her people again. After recovering, Chase offered Sune immunity in exchange for her cooperation in the investigation of Medusa.

Now, Batwoman faces the suernatural forces of Medusa, and uses a special next-generation technology weapon to target each of them with a specially tailored attack. Watching his people fall to Batwoman's attacks, Falchion takes one of the captured children and threatens that unless she deactivates the device, he will kill the boy.

Batwoman responds that Falchion will not kill the boy, because, for some reason, Medusa needs them. They would not have collected them if they were not necessary for something. Angrily, Falchion responds that the reason for the kidnappings will never be known to her, as he attacks her with his sword. The blade manages to cut through her special armour, and he explains that no armour forged by man can stop a blade fashioned by the Mother. Before he can separate her head from her shoulders, Falchion is suddenly pierced by several arrows.

From above, Sune shouts that the Mother crafted arrows as well as swords.

Retrieved from "https://heykidscomics.fandom.com/wiki/Batwoman_Vol_2_8?oldid=1412705"
Community content is available under CC-BY-SA unless otherwise noted.