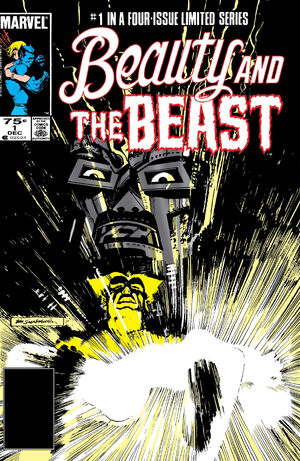 Appearing in "Beauty and the Beast Part 1"Edit

Synopsis for "Beauty and the Beast Part 1"Edit

The threat of blackmail from his alleged son looms over Doctor Doom’s head. He decides to keep an eye on the man who resides in California. Also in California, Beast arrives in Hollywood to visit Wonder Man, while Dazzler, currently a lightning rod for anti-mutant hysteria, tries to lay low. She unintentionally meets a talent scout at a party who then brings her to his boss and signs her into a restrictive contract. The resultant whirlwind of activity and media attention taxes the starlet; her powers flare out of control and her grip on reality loosens. Beast and Wonder Man cross paths with the once-again famous Dazzler at a cast party on a studio back lot. After a horse-faced mutant named Rocker aggressively hits on Alison, Beast decides to intervene. The conflict turns violent, but then Dazzler betrays her friendship with Hank by telling him to stop acting like such a beast. After Dazzler leaves, her light-emitting powers rage out of control and she runs away. Her agent, suspiciously unsurprised, has her followed. Beast reads about Alison’s disappearance in the paper next day and decides he needs to rescue her. He beats information on Dazzler’s whereabouts out of Rocker and heads to her current location: an old building on the coast called the Heartbreak Hotel, where she is being nursed to health by a group of misfits. Beast enters, finds Alison lying in an uncontrollable cocoon of light, and wraps her in his arms. He promises her everything will be alright.

In the nation of Latveria, Dr. Doom marvels over some sculptures when he receives word from his butler that someone in the United States is claiming to be Dr. Doom's soon. Doom thinks back many years to a time when a woman claimed that he had sired her boy, refusing the claim, Doom would have her exiled from his kingdom. Doom still finds these accusations preposterous however, Doom learning that his supposed heir has become something of a big name in California, decides to pay closer attention to his activities.

Meanwhile in Los Angeles, the Beast has taken time off from the Defenders to take a vacation and visit his friends Simon Williams and Dazzler. Beast is particularly worried about Dazzler since she outed herself as a mutant. When travelling into the city proper and finding that her last venue had closed down and posters of her last performance vandalized with anti-mutant epitaphs he finds that his concerns were well founded.

That night Alison herself has found herself at a Hollywood party in a mansion owned by Alexander Flynn. Flynn approaches Dazzler and tells her that he is a big fan, and offers her a singing gig as part of his "Underground Theatre." She initially refuses for fear that the audience would react negatively to the fact that she is a mutant, however Flynn assures her that it is safe. She goes for an audition held by the theatre's owner Hugo Longride, who is impressed with her signing prowess and has her sign a contract immediately. Shortly, Flynn begins taking Dazzler out to many Hollywood parties, convincing her to take up drinking once more and creates a media frenzy that lists the once proud musician as a queen of decadence in the papers. As the days progress, Alison is shocked to find that she is slowly losing control of her powers, and when she confronts Flynn about her negative press he tells her not to worry about their lies.

At a wrap up party on a studio, Dazzler talks with Max Rocker, an aggressive member of the theatre she joined. She is shocked to learn that all the members of the theatre are mutants. Attending the party is Wonder Man and Beast, and when Henry recognizes Dazzler, he doesn't like the way that Max Rocker is talking to her and approaches the two of them. The two men almost come to blows when Longride shows up to break it up. He secretly asks Max if he completed his "job" and Max confirms. Hugo then makes a quip that Alison and Hank are "Beauty and the Beast" which angers Hank again who tries to take a shot at the theatre owner, however Alison talks him out of it. Dazzler leaves with Hugo and his cohorts, dropping her purse behind when she realizes her powers are acting up again. Watching them go, Beast is convinced something suspicious is going on however Simon cautions his friend to be careful because Hugo Longride has a bad reputation.

Suddenly, Alison's powers spike out of control causing the girl to flee, Hugo sends one of his men to tail her. When the news about Alison's disappearance hits the newspapers, Beast decides to go out looking for her thinking that Hugo and his goons had something to do with it. Tracking Max back to his home and the two end up fighting, Beast demanding where he had taken Dazzler. As their battle rages, Alison herself has gone to the beach and let her powers finally go out of control before she falls into the ocean. She is then rescued and taken to safety by a strange group of people, the man hired to tail her reports back to Hugo about her whereabouts.

Back at Max's pad, Beast has beaten his foe into submission and forces him to call in to his bosses and find out Dazzler's location: 26 Ocean Circle. Beast travels to the location and finds it's a large house dubbed the "Heartbreak Hotel". Beast smashes through the door and demands to be taken to Dazzler, however the woman cleaning inside claims that she has never seen her on the property. When Beast notices a light shining out from under one of the doors, Beast forces his way past a young mutant named Poltergeist and finds Dazzler in an adjacent room, her powers brightly shinning out of control, and that the girl herself is almost delirious. Beast comes to her side, and cradles her in his arms telling her not to worry and that he will take care of her.

Retrieved from "https://heykidscomics.fandom.com/wiki/Beauty_and_The_Beast_Vol_1_1?oldid=1430559"
Community content is available under CC-BY-SA unless otherwise noted.