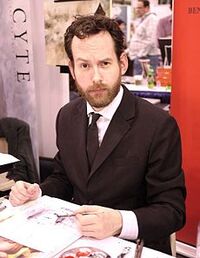 Ben Templesmith (born 7 March 1984) is an Australian comic book artist best known for his work in the American comic book industry, most notably the Image Comics series Fell, with writer Warren Ellis, and IDW's 30 Days of Night with writer Steve Niles, which was adapted into a motion picture of the same name. He has also created book covers, movie posters, trading cards, and concept work for film.

Templesmith was born 7 March 1984, in Perth, Western Australia.[1] He graduated from Curtin University with a Bachelor's Degree in Design, and holds a diploma of Cartoon and Graphic Art from the Australian College of Journalism.[2]

Templesmith produced his first commercial American comics work in 2002, providing the art for Todd McFarlane Productions' Hellspawn, which was published by Image Comics. He has gone on to create his own original works as well as contribute to many licensed properties at various publishers, most notably IDW Publishing, with which he had an exclusive agreement through most of 2008 and part of 2009 before returning to being a freelancer.

Among licensed properties that Templesmith has worked on include illustrating "Dark Journey", a story in issue #17 of the Dark Horse Comics anthology series Star Wars Tales in 2003, and the covers to Devil's Due Publishing's Army of Darkness: Ashes to Ashes #1 in 2004 and IDW's G.I. Joe #0 in 2008.

Original works Templesmith has produced include the miniseries Welcome to Hoxford, the New York Times best-selling Wormwood: Gentleman Corpse [3] Tommyrot: The Art of Ben Templesmith, Conluvio and Choker at Image Comics with writer Ben McCool. He also provided a number of covers for the Oni Press series Wasteland.

In April 2012 DC Entertainment announced that Templesmith will be one of the artists illustrating a new digital Batman series whose stories will be set outside of the regular DC continuity.[4]

Retrieved from "https://heykidscomics.fandom.com/wiki/Ben_Templesmith?oldid=212766"
Community content is available under CC-BY-SA unless otherwise noted.