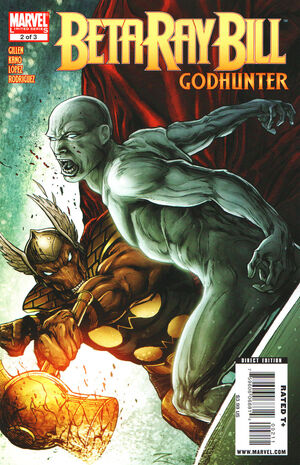 Rejoice! Stardust comes to your tiny, pointless sphere with the greatest of tidings! I bring news of glory! Form choirs! Sing hallelujahs! Offer exultations! You are to be the latest meal for the all-consuming Galactus! And those who turn from this honor and run shall be pursued and suffer mere death.

Stardust arrives on I'than Prime to offer them up to Galactus. But in space, Beta Ray Bill and the Silver Surfer battle. Unknowing to them both, the I'thans possess great weapons that they had put aside in their distant past, when they had at one time been conquerors. Using these weapons, they manage to drive off Stardust and the Surfer for a short time. The I'thans refuse to abandon their planet without a fight, but Bill forces them to leave by causing a plague amongst them and won't give them the cure until after they have evacuated the planet. Afterwards, back aboard Skuttlebutt, Bill is unable to lift Stormbreaker anymore.

Retrieved from "https://heykidscomics.fandom.com/wiki/Beta_Ray_Bill:_Godhunter_Vol_1_2?oldid=1414404"
Community content is available under CC-BY-SA unless otherwise noted.