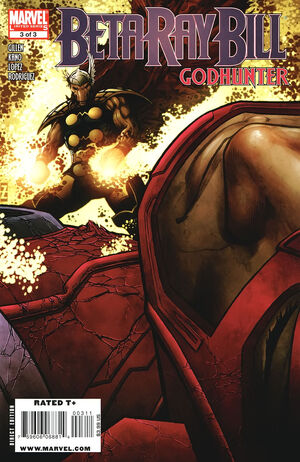 Why would I go anywhere? I'm home.

Beta Ray Bill has driven Galactus to desperation. Starving and weak, he tells his heralds his plan. In the shadows of I'Than III, Bill and Skuttlebutt wait. Shortly, Skuttlebutt detects the Silver Surfer on the planet, and Bill goes to stop him and has Skuttlebutt begin planting explosives to destroy the planet. But the Surfer only wants to talk. He tells Bill about Galactus' desperation, and that he will die soon if he does not feed. But when he goes, it will not be quietly. All life within forty-two light years will be wiped out. I'Than III is an uninhabited planet, leaving Bill the choice of letting Galactus feed or being responsible for the deaths of trillions of beings. Enraged, Bill leaves the planet to the Surfer. The I'Than are watching though, and want revenge on all of them. Hundreds of thousands of warships are heading their way, but with one purpose, the destruction of Bill and Galactus. Bill sits distantly in Skuttlebutt, while Galactus begins to feed on I'Than III. But the I'Than have arrived, and the Surfer and Stardust are severly outnumbered by their warships. Bill realizes that he has no choice, he must save Galactus. He has Skuttlebutt uncouple his reactors, so that shortly he will go critical and hopefully take the I'Than with him. He races down to the planet, and stands in defense of Galactus, allowing him time to feed. Energized, he wipes out the I'Than fleet and prevents Bill from going critical. Galactus would know why. Why did he try to destroy him, then turn and save him. Bill tells him that he was build to protect his people, but Galactus had wiped them out, and he had no other purpose than to end him. But not at the cost of untold innocent life. His people would not want their legacy tainted with so much blood, and that he is the last of his kind. This strikes a chord in the being formely known as Galan of Taa, and using his power pulls from the ether, a spirit that had not crossed over to another planet of existence, and creates a mate for Bill - Ti Asha Ra. They travel back to the Peak, and turn Voidian over to Agent Brand, and make themselves at home. Ti Asha Ra asks Bill what he will do next, and he says first he must return Stormbreaker to Asgard now that he is no longer worthy of it. She tells him that he's not and leads him over to it, and places his hand around it and holds it up. He is indeed worthy of Stormbreaker after all.

Retrieved from "https://heykidscomics.fandom.com/wiki/Beta_Ray_Bill:_Godhunter_Vol_1_3?oldid=1414405"
Community content is available under CC-BY-SA unless otherwise noted.