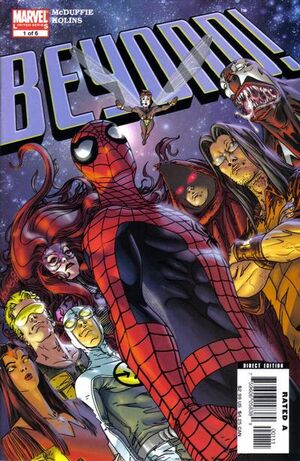 Appearing in "The Great Beyond"Edit

Synopsis for "The Great Beyond"Edit

The Story starts with Michael Collins burying a group of heroes including Bi-Beast, the Super-Skrull and a Kree warrior. Meanwhile in New York, Gravity, with permission from his girlfriend, battles Brushfire, he crushes Brushfire with a car, then convinces him to surrender. He then finds himself drawn to a big thing in the park. He crashes into it and awakes on a ship in deep space along with Spider-Man, Firebird, Hank Pym, Wasp, Medusa, Venom, Kraven and Hood. The Beyonder then contacts them telling them to kill their enemies. Almost instantly Venom turns on Spider-Man, the two fight an Spider-Man claims he does not need help beating Venom, when Venom impales him through the stomach. Spider-Man dies in Medusa's arms (well, her hair).

Retrieved from "https://heykidscomics.fandom.com/wiki/Beyond_(Marvel)_Vol_1_1?oldid=1430546"
Community content is available under CC-BY-SA unless otherwise noted.