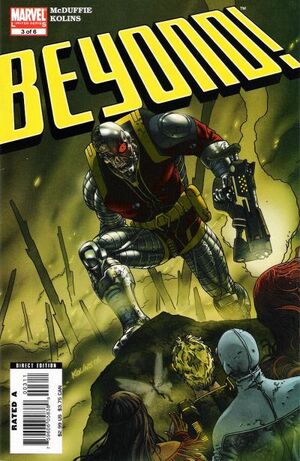 Cynicism isn't maturity. Callousness isn't strength. Pretending you don't care so you don't have to try isn't "winning". What you do with your life matters. I suspect, deep down, you already know that. But if you don't, try paying attention to the "twelve year old" over there.

The Heroes confront Dragon Man but Deathlok's analysis reveals that their odds of winning are low, he unlocks class 100 strength and a no-killing parameter. By the time he has done this, Gravity and Medusa have been taken down, Deathlok attacks Dragon Man and is defeated they are all doomed ubntil Firebird intervens and sends him flying, Deathlok finds Dragon Man unconscious and the heroes walk off, later they gather around a fire to plan whilst Kraven goes into the jungle on the trail of "Spider-Man". When he finds him, Spider-Man tells him that he must kill the others, Kraven refuses and heads back to camp, suddenly Hood emerges from the bushes and takes Spider-Man back to camp, there he is tortured by Kraven and Hood and it is revealed that he is a Space Phantom.

Retrieved from "https://heykidscomics.fandom.com/wiki/Beyond_(Marvel)_Vol_1_3?oldid=1514647"
Community content is available under CC-BY-SA unless otherwise noted.