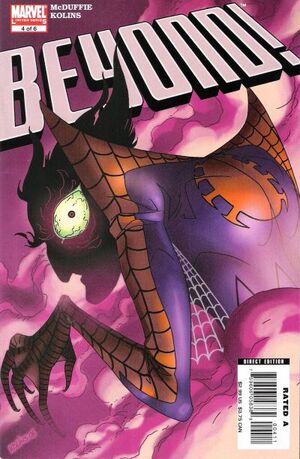 Will you stop shooting everybody?!

The Story picks up with Space Phantom telling them off the fact he nearly defeated the Avengers, this causes Hood to shoot him in the leg. Firebird moves to treat the Space Phantom but Wasp stops her. She explains that the SPace Phantom can imitate anybody putting them into Limbo, Hank Pym reveals Spider-Man is not dead. As Medusa picks him up the Space Phantom transforms into Xemnu the Titan, Deathlok has no knowledge of the titan in his computer memory. Space Phantom then picks up Medusa and throws her away, Gravity catches her and returns her to the fight. Firebird melts him into the rock but he escapes, Hank Pym then shoots him with a gun he just made causing him to lose consciousness. Suddenly Space Phantom wakes up, changes to Northstar and flees. Hank Pym reveals that the Space Phantom was suppse to change so the gun would let them follow him to liombo through a dimensional doorway in his pocket. They enter Limbo and find the real Northstar in suspended animation. Meanwhile back on the planet Venom finds the doorway and destroys it.

Retrieved from "https://heykidscomics.fandom.com/wiki/Beyond_(Marvel)_Vol_1_4?oldid=1547297"
Community content is available under CC-BY-SA unless otherwise noted.