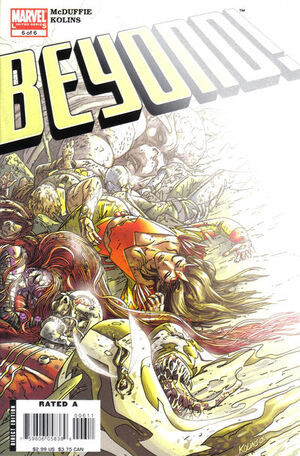 Appearing in "The Observer Effect"Edit

Synopsis for "The Observer Effect"Edit

Hank Pym is the winner of the game. Uatu watches as the Beyonder talks to Hank Pym. Hank asks for 3 things. 1, to be returned to Earth. 2, he wishes to see who the Beyonder really is, as he believes that the Beyonder is dead, it is then revealed that the Stranger is in charge. 3, he wants the Stranger to stop the experiment. The Stranger refuses but offers to resurrect Hank's teammates, it is revealed they are not dead, just shrunken. They do battle until Deathlok points out that they will probably win as the watcher has turned up only this once. Stranger, fearing his defeat, cancels the experiment and the planet begins to fall apart. Gravity holds it together long enough for them to make it to the ship, but dies before they reach Earth. At Gravity's funeral all the heroes attend and speak with his parents, even Venom hides in the bushes. Uatu then reveals that Gravity's death is not the end of his story.

Retrieved from "https://heykidscomics.fandom.com/wiki/Beyond_(Marvel)_Vol_1_6?oldid=1430551"
Community content is available under CC-BY-SA unless otherwise noted.