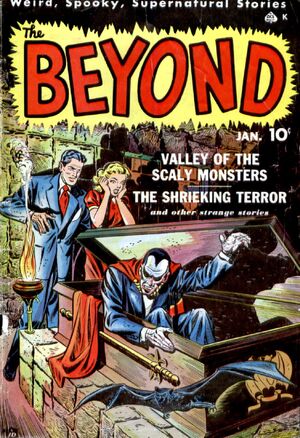 Publisher
Marvel Comics
Previous Issue
Next Issue
Beyond #1
Beyond #3

Say no more, Shrinkage is nothing to joke about!

Continuing from last issue with the death of Spider-Man, Medusa attacks Venom. She defeats him and Hood puts a gun to his head but is told to back off by Wasp. Medusa sentences him to 50 lashes and starts to whip him, Venom stabs her in the legs and escapes, destroying the engines causing the ship to crash. Medusa saves the group and they make it out alive, with Venom nowhere to be seen. The group meet Michael Collins who reveals he is a survivor from a previous test. He tells them of a nearby city. Hank Pym pulls a Quinjet from his pocket and they all get in, except for Collins. They are attacked by Dragon Man. Spider-Man's corpse lands away from the battle and he gets up and walks off. Meanwhile Collins reveals to the group he is Deathlok and joins the battle.

Retrieved from "https://heykidscomics.fandom.com/wiki/Beyond_Vol_1_2?oldid=1514623"
Community content is available under CC-BY-SA unless otherwise noted.