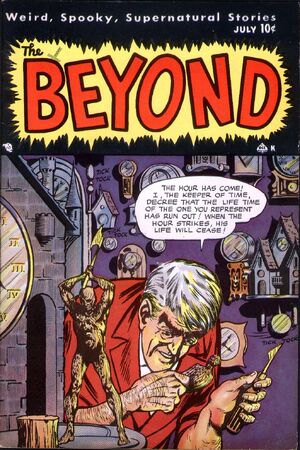 Publisher
Marvel Comics
Previous Issue
Next Issue
Beyond #4
Beyond #6

Venom has returned and trapped the heroes in Limbo. Whilst the heroes are trapped in Limbo they begin to argue amongst themselves. Henry Pym has used the equipment in his pocket to build a lab, viewed by Firebird, he rows with Wasp. Hood and Gravity talk about their families, Wasp and Medusa argue about men until Firebird and Hank kiss. Deathlok then confronts Hank with an idea. Outside Venom is declaring his victory to the Beyonder until Space Phantom, still disguised as Northstar turns up. Venom tries to kill him but Space Phantom retreats to Limbo, they capture him and get a lift back to battleworld, Space Phantom takes Deathlok's form but Wasp catches him out and the team are reunited. Outside again, they discover Venom staring at the Watcher mistaking him for the Beyonder. Suddenly Pym draws his gun and shoots Venom. He then turns and shoots Gravity, Deathlok, Hood and Medusa. Kraven attacks him but when Firebird defends Hank, he shoots them both. Looking at whats hes done, Hank mutters "Game over."

Retrieved from "https://heykidscomics.fandom.com/wiki/Beyond_Vol_1_5?oldid=1415142"
Community content is available under CC-BY-SA unless otherwise noted.