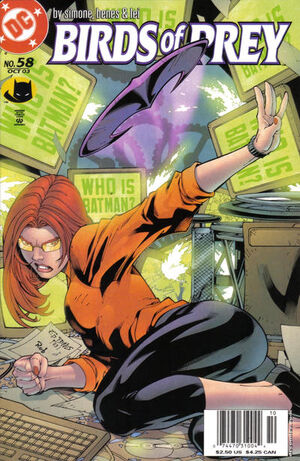 Dinah reflects on her training, the different methods of Sensei Otomo and Lady Shiva. The difference, pain. pain is a great motivator, and she is using that pain to escape. She's interupted, Andrew Fisher. He wants to help her, but he can't. His family is threatened, he has to obey.

Savant also reflects on his past. He wanted to be a hero, but Batman stopped him, rejected him, made him mad.

Huntress is at a parking garage, trying to get a lead on Savant's car. The nerdy parking attendant stands in her way, but offers her a deal, the info she wants in exchange for a date. She threatens the valet, but he styands firm, in the end, she gives in, a date for the information. Huntress is worried about how long this is taking, she urges Oracle to pay Savant off, but Savant doesn't want money.

Savant contacts Oracle. He tests her again, and demands she give him something. She tries to stall, but he threatens to kill Black Canary. Finally, she agrees to do as he says. She reveals to Huntree that Savant wants Batman's secret identity.

Fisher tries to appeal to Savant, to get him to release Black canary, but Savant reacts violently, threatening Fisher's family, locked in the wine cellar.

Savant talks to Black Canary. He wants to know about Oracle again. Fisher interupts, bringing Dinah some tea. Dinah buys time, telling them she needs "feminine products." The embarassed Savant and Creole retreat. Dinah is victorious, and an extra bonus, Fisher passed her her communicator in the tea. She calls Oracle.

Oracle is able to get Black Canary's position and routes Huntress there. Told help is coming, Black Canary breaks her own hand, freeing herself. When Savant returns, she ambushes him and flees, to be stopped in her tracks by a flight of stairs.

Huntress arrives. She knocks out Creole, briefly, and calls for Black Canary. Savant, meanwhile, has recovered and goes after Canary. Creole gets up behind Huntress.

Retrieved from "https://heykidscomics.fandom.com/wiki/Birds_of_Prey_Vol_1_58?oldid=1412830"
Community content is available under CC-BY-SA unless otherwise noted.