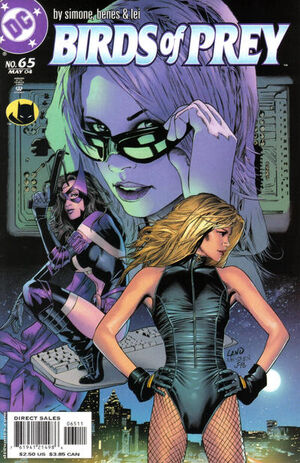 Now maybe you could refresh my memory here. Have I killed you once before, or will this be the first time?

Black Canary takes down a couple muggers. Lady Shiva offers Black Canary the chance to be her apprentice. Canary asks for some time to consider the offer and is given 12 hours. Barbara Gordon has been kidnapped. She pickpockets a cell phone from one of her captors and calls Huntress. Huntress traces the call and goes to rescue Barbara. Huntress takes out the guards and finds Barbara's cell. The only thing standing in her way now, is Savant. The two start to fight, and Barbara finds a gun and points it at Savant. Shiva finds out that Cheshire killed her sensei and the two women fight. Cheshire drugs Shiva with a neurological poison and holds a knife to her throat.

Retrieved from "https://heykidscomics.fandom.com/wiki/Birds_of_Prey_Vol_1_65?oldid=1412837"
Community content is available under CC-BY-SA unless otherwise noted.