View source
Part of the 'One Year Later' event 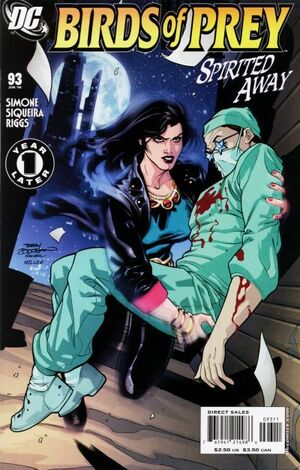 Now why does an organization with three hundred supervillains in it send in these no-name drones? Distraction.

In Vietnam, Black Canary continues her brutal training under Mother. She shows remarkable fighting prowess, but Mother derides her lack of discipline. Sin, on the other hand, has only grown closer to her. Meanwhile the Crime Doctor is still in the hospital, and Huntress guards him while Lady Shiva, Lady Blackhawk, and Gypsy retrieve his daughter, Bethany Thorne. Both groups come under attack from H.I.V.E. agents.

In Vietnam the warlords arrive to wipe out Mother's village. Mother proclaims that they will neither fight nor run, and that this is part of Black Canary's training. Meanwhile the Crime Doctor is kidnapped while Huntress is busy fighting H.I.V.E., but clues at the scene lead Oracle to deduce that the kidnapper is none other than Prometheus.