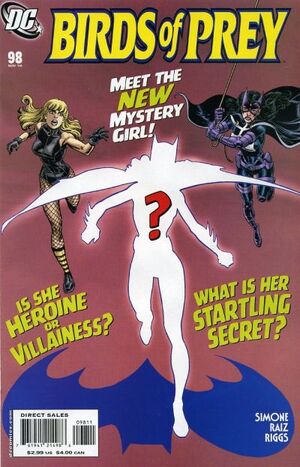 She brought the JLA down on us. We ain’t set up for that. --- They got a green guy what can read your mind and fuzzle his entire body into weird shapes and *$%.

The O'Shanlin family pick-up Yasemin as she is being released from prison. They ask her to stay away from Helena Bertinelli, even though she locked Yasemin up, because she brought the JLA down on them. Yasemin kills them.

Dinah tries to convince Barabara that she can raise Sin and is the best choice. Dinah even considers quitting to raise her. On a different subject, Dinah is curious about this new Batgirl that has been reported, and why it has happened right after Barabara has regained feeling in her legs. Barabara tasks the team to find this new “Batgirl.” They find her, and discover that she knows them – their real names!

Yasemin hears about the conflict over police-band and heads on over to have her vengeance on Huntress. However, "Batgirl" notices the assassin and teleports in front of Huntress, taking the bullet herself! Yasemin and Batgirl both suddenly disappear, only Batgirl re-appears right behind Oracle – and she knows her secret identity as well!

Retrieved from "https://heykidscomics.fandom.com/wiki/Birds_of_Prey_Vol_1_98?oldid=1510165"
Community content is available under CC-BY-SA unless otherwise noted.